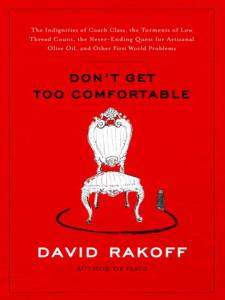 Commonly known as an internet meme, “first world problems” are at the centre of Don’t Get Too Comfortable, a 2005 collection of humourous autobiographical essays by David Rakoff. Loosely organized around the theme of creature comforts and their attendant absurdities, the recently deceased Rakoff riffs off his experiences as a journalist and new American. Fans of his work may recognize a number of the pieces as having been published in various magazines. Rakoff’s anecdotes make rich and entertaining fodder for examining the peculiar excesses of American life from super-sonic jet rides to $300 fad fasting diets to penis puppetry art shows.

Rakoff’s frequently self-deprecating humour and criticism tempers the strangely genial misanthropy of his constant diatribe. He does not hold his personal foibles apart from the social commentary or exempt himself from scrutiny. His own first world excess is gamely revealed in an essay about his abiding love for endless hours spent on Martha Stewart arts and crafts. As a Canadian-turned-American, he presents the perspective of an immersed outsider, able to both observe and participate in the consumerist shenanigans.

Readers expecting a well organized argument towards a thesis of American excess may be disappointed, as many of the essays are only loosely thematic. It is quite possible to reach the end of some of the essays unsure of how they connect to the central conceit. Although all of the pieces are humourous, there are some long lulls between punch lines. However, Rakoff’s mastery of language means that his wittily turned finishes are usually worth waiting for. This quick read can be devoured in a single sitting, or picked up over days or weeks for a bit of light reading.

3 thoughts on “Don’t Get Too Comfortable”