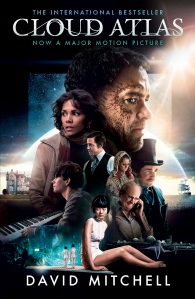 “In the first set, each solo is interrupted by its successor; in the second, each interruption is recontinued, in order. Revolutionary or gimmicky? Shan’t know until it’s finished, and by then it’ll be too late…”

“One model of time: an infinite matryoshka doll of painted moments, each “shell” (the present) encased inside a nest of “shells” (previous presents) I call the actual past but which we perceive as the virtual past. The doll of “now” likewise encases a nest of presents yet to be, which I shall call the actual future but which we perceive as the virtual future.”

To describe Cloud Atlas  as a work of science fiction or fantasy is almost reductive, given the way each of the six interlinking stories move through time and genres from travelogue to epistolary to murder mystery and beyond. David Mitchell takes the reader through settings as various as the South Pacific, East Asia and Europe, beginning from the California Gold Rush and stretching into a post-apocalyptic future on the islands of Hawaii. The matryoshka doll serves as the organizing conceit, as each story is interrupted to begin the next, and the connection between the new story and the previous tale is revealed. The interrupted tales move forward in chronological order, and then reverse, finishing with the story that began it all.

The first story is that of Adam Ewing, a Californian notary who has traveled to Australia to execute a will. The second tale follows Robert Frobisher, a bankrupt and disinherited English aristocrat and musician, who has sought out his blind musical idol, and become his amanuensis. Next, is the story of Luisa Rey, a reporter who is trying to get the scoop on a report about a potentially dangerous nuclear reactor. Then comes Timothy Cavendish, an indebted British publisher forced to go on the lam with unexpected consequences. He is followed by Sonmi~451, a humanoid fabricant of abnormal intelligence. Finally, there is Zachary, a young man who lives in a violent and superstitious post-apocalyptic society.

In the turn of the page between one chapter (or novella) and the next, it is necessary to switch gears almost completely while still seeking the connections between the disparate narratives. Mitchell demonstrates his stylistic dexterity and challenges the reader to keep pace. The only book that doesn’t quite ring true is the first, where the vocabulary and style seem deliberately high-strung to the point of absurdity.  However, Mitchell has one of his characters make a sly nod to this fact in the second story, suggesting the choice was deliberate. The futuristic slang of the sixth story is similarly distracting at first, but is quickly absorbed into the action of the story.

In the second tale, Letters from Zedelghem, Robert Frobisher composes the Cloud Atlas sextet, which shares a title and structure with the novel itself. Writing to his friend and lover Sixsmith, Frobisher questions whether the structure of his composition is “revolutionary or gimmicky,” and laments that he won’t know until it is finished. Likewise, the patient reader must bear with the frequent interruptions in the plot in order to reach the pay-off. Ultimately however, the cleverness of the construction surpasses its significance.