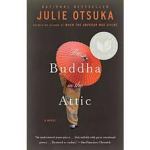 “Some of us left weeping. And some of us left singing. One of us left with her hand held over her mouth and hysterically laughing… Kimiko left her purse behind on the kitchen table but would not remember until it was too late. Haruko left a tiny laughing brass Buddha up high in a corner of the attic, where he still laughing to this day.”

Written from the perspective of a collective “we,” The Buddha in the Attic relates the experiences of the Japanese picture brides who came to America in the early 1900s. Betrothed to men they had chosen from photographs, and promised a more comfortable life across the sea, these women left their homes and families for a hard new life on America’s frontier. Many arrive to realize that the husbands they were promised were mere fictions, and the men they are expected to marry are poor migrant agricultural workers. The lives they are able to build for themselves over years of hard work are abruptly yanked away from them with the onset of World War II and the institution of the Japanese internment camps. What is left behind is a haunting sense of absence, horror, and guilt, which troubles both their neighbours and the collective conscience of American history.

The Buddha in the Attic is comprised of scattered handfuls of small seeds that could easily grow into entire stories on their own. Instead, they build upon one another until the weight of hundreds of tiny, human details coalesces into a picture of sacrifice and toil. The collage it forms highlights both the commonality of experience and the details of individual lives. Julie Otsuka’s prose is lyrical, occasionally verging on poetry and the reading experience is generally much more similar to poetry than to prose; the reader is left with a series of strong impressions and experiences, as opposed to a well-defined narrative. The collective voice persists throughout, defying the expectation to give way to a singular narrative. This novel shows the evidence of careful historical research, such that it could almost be described as creative non-fiction, but the individual details are creations of the imagination designed to provoke reflection and sympathy, despite the lack of an identifiable protagonist.

At the conclusion of the novel, the Japanese women are snatched away, gone silently into the unknown. Only our knowledge of history tells us what waits for them in the internment camps, and after the war. The loss of their voices forms a tidy parallel to the absence they left in their communities. Instead we must hear from their neighbours who shift uneasily, perhaps guiltily, under the weight of carrying the narrative burden. The details slip through their fingers, because it is not their story. The details dissolve into the realm of hearsay and rumour, before sliding into forgetfulness as life goes on without them. But though the story ends, it leaves an unsettling, lingering impression disproportionate to the size of the novel.

8 thoughts on “The Buddha in the Attic”