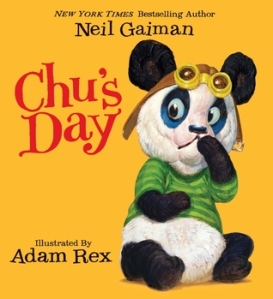 For a little anthropomorphic panda named Chu, every day is fraught with a burning question: will he sneeze today? Because when Chu sneezes, the disastrous consequences are out of all proportion with his size. Everything, from book dust at the library, to pepper at a diner, to animals at the circus, might be the thing that sets Chu off. And nobody wants to be around when that happens.

Neil Gaiman is a wonderfully diverse author, and Chu’s Day is one more example of that fact. Chu’s Day is for younger children, and unlike his older children’s books—Coraline and The Graveyard Book—it isn’t at all creepy. Quite the opposite, in fact. As suggested by the bright yellow cover and soft, warm illustrations, the story is light and humourous, with mild fantastical elements. Adam Rex’s large, bright illustrations, including several lavish double-page spreads, make Chu’s Day a perfect story time book. The repeated almost-sneezes have great read-aloud and audience participation potential. Best of all, the story is charming enough that adults shouldn’t get bored when they are inevitably asked to read-it-again!