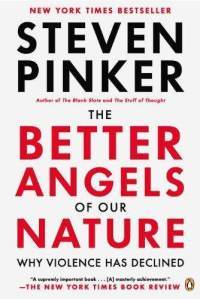 “If the past is a foreign country, it is a shockingly violent one. It is easy to forget how dangerous life used to be, how deeply brutality was once woven into the fabric of daily existence.”

In The Better Angels of Our Nature, Steven Pinker offers up a thesis which, for some, may seem wildly unbelievable. Pinker contends that we are currently living in the least violent period ever known in human history. Using the number of violent deaths relative to the population of the time, Pinker examines trends in murder, war, terrorism and violent crime, and charts a consistent decline in their prevalence in cultures around the world. Having established this decline, Pinker sets out to find the psychological and sociological factors which contribute to the trend.

The structure of the book is predicated on the idea that people will find the thesis difficult to swallow, as Pinker explains in the introduction. He spends six exhaustive chapters—well over half of this 800 page tome—in extensive statistical demonstrations of the decline. While the trends themselves are interesting, the constant barrage of statistics will likely wear thin for the reader who doesn’t find the thesis as difficult to believe as the author assumes. Overall, these statistics are well-explained for the average reader, and clearly illustrated in numerous charts and graphs. However, an understanding of statistics would undoubtedly be beneficial to any critical analysis of Pinker’s findings.

Once he has established the statistical decline of violence, Pinker spends the second part of the book examining the sociological and psychological factors that encourage and inhibit violence, as well as identifying a number of popular culprits which are not actually borne out by the numbers. For example, he found that weaponry, affluence, resources and religion, while sometimes significant, were not consistent factors. The explanations rely heavily on neurobiology and the history of governance, necessitating numerous detours into the basics of these disciplines, and their relevant principles. Pinker finds extremely strong correlations between government and commerce, and the decline of violence.

Not unexpectedly, The Better Angels of Our Nature makes for heavy emotional, as well as intellectual, reading. A discussion of the nature and history of violence necessitates the inclusion of a variety of stomach-churning examples, such as the burning of cats for public entertainment in medieval Europe. However, these examples prove instrumental for demonstrating the extent to which we exaggerate contemporary violence and discount historical violence. Pinker has a deft hand for defamiliarization, a technique he uses to draw historical violence in perspective with its modern counterpart. For example, although we accept the cross, a historical instrument of violence, as the symbol for Christianity, Pinker points out that our modern sensibilities would likely be offended if a group of Holocaust survivors adopted a showerhead as their symbol, or if survivors of the Rwandan genocide rallied around a machete logo. This unusual comparison forces the reader to examine the familiar, even ubiquitous, symbol of the cross with fresh eyes. These numerous violent examples are not trotted out gratuitously, or ad nauseam, but always to illustrate a particular point about how we perceive violence, or why we commit it.

Despite the difficulty of getting through this book—it took me over six weeks to read—I  would rate it highly, and strongly recommend it for those interested in the subject. I agree with Bill Gate’s assertion that it is “one of the most important books I’ve read—not just this year, but ever.” We need both the optimism and the insight which Pinker’s work provides since, as he points out, the decline of violence is not ineluctable—it could be reversed at any time. That being the case, it’s probably a good idea to understand what we’re doing right, and how we can do better.

2 thoughts on “The Better Angels of Our Nature”