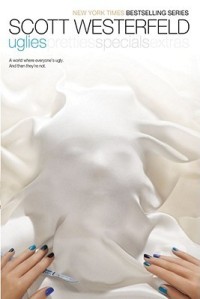 “She could see New Pretty Town through her open window. The party towers were already lit up, and snakes of burning torches marked flickering pathways through the pleasure gardens. A few hot-air balloons pulled at their tethers against the darkening pink sky, their passengers shooting safety fireworks at other balloons and passing parasailers. Laughter and music skipped across the water like rocks thrown with just the right spin, their edges as sharp as Tally’s nerves.”

Almost-sixteen-year-old Tally is lonely and tired of waiting for her birthday. All her friends have already had their birthdays and undergone the operation that turns them from repulsive Uglies into stunning Pretties. Tally is stuck alone in Uglyville, while all her friends are partying and having the time of their lives in New Pretty Town. But Tally still has three months to wait, and the summer seems interminable until Tally meets Shay, another Ugly with a September birthday. Tally thought that as a senior Ugly she knew all the tricks, but Shay is even more adventurous than Tally. Tally is relieved that she finally has someone to keep her company, and a friend who will eventually share the experience of being a New Pretty with her. But Shay isn’t sure she wants to become a Pretty and, unlike Tally, she knows how to get out of the city. When Shay runs away to join the Smoke, a rebel community that rejects the operation, Tally is faced with a terrible choice between betraying her friend, and never becoming Pretty.

Uglies is a dystopian novel, and the ostensible purpose of the surgery is that making everyone equally beautiful creates equality of opportunity—no one can be biased towards beautiful people if everyone is gorgeous. Of course, as Shay points out, that also means everyone is the same, and that’s boring. This sounds like a relatively weak premise to build an entire society around, but Westerfeld manages to bring the world to life in convincing detail. By taking modern preoccupations with beauty and popularity to hyperbolic extremes, Westerfeld creates an interesting commentary on friendship, conformity and cultural programming. Tally wants desperately to be an insider, but she is constantly forced to consider the implications of her choices for those around her.

Like many YA stories, the romance of Uglies revolves around a love triangle; both Tally and Shay are interested in the same boy, and although Shay met him first, he seems more interested in Tally. The MFF configuration is unusual, but so is Westerfeld’s focus on the impact that the triangle has on the girls’ friendship. In MMF triangles, the boys are typically rivals who can’t stand one another, so there is no friendship at stake. This additional interpersonal element makes the triangle as used here less of a tired YA trope.  We become more concerned about whether the love interest will drive Tally and Shay apart than about who will get the guy.

Uglies follows a somewhat predictable and heavy-handed plot arc packed with some cliché actions sequences supported by futuristic tech, but it also deals with an array of complex ethical concerns. From the beginning, Tally faces a set of difficult choices which force her to weigh her own interests and beliefs against those of others. Shay and Tally provide an interesting study in contrasts about the different ways of perceiving the ethics of this dystopian future. The moral ground continually shifts beneath the characters’ feet, as more information about the futuristic society is revealed. Through the medical nature of the Pretty operation, Westerfeld even introduces the concept of informed consent in scientific research, which is hardly typical fare for YA lit. In dystopian stories, it can be all too easy for authors to create righteous rebellions and straw-man villains. In my review of Reached, I praised Ally Condie for creating a dystopian world that acknowledges grey areas, and Westerfeld deserves similar accolades for putting characters in situations with no obvious right choice, and carefully examining the consequences.