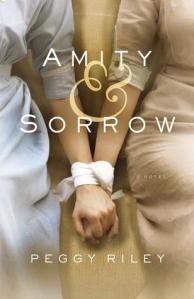 “And then Sorrow spins her, faster and faster, at last. Her eyes shut, the room wheels in her head and all about her. She feels herself spinning with the stars and the sky. She feels herself in a circle of women, visible and invisible throughout all of time, family eternal. They are there in her body, there in her blood. She knows they are waiting for her, reaching down from cloudy heaven. And Rapture, when it comes, will come as a vortex, twisting the faithful up to God with the dead. That is what they are spinning for—they are spinning to feel how the world will end.”

In the backseat of a crashed car in the back country of Oklahoma, two sisters are tied together at the wrist. Their mother, Amaranth, has just stolen them away from a polygamous sect which she helped found with their father, Zachariah. She has driven for four days and four nights, until she finally crashed from exhaustion.  Their temple has burned to the ground, but she is convinced that her husband will follow them to the ends of the earth to reclaim what is his. Although she has known the world outside their tiny splinter sect, her daughters are entirely innocent, or rather, ignorant. They have been snatched from the only life and the only world they have ever known, unable even to locate home on a map. Twelve year old Amity is cautiously curious about what this new world has to offer her, but her older sister, Sorrow, just wants to go home, back to where she was her father’s favoured daughter, and the Oracle of their unusual religion. Bradley, the man on whose land they have crashed, is kind but wary, unprepared to care for them, but unwilling to force them to leave. His soft heart is already evidenced by a Hispanic boy nicknamed Dust who Bradley has taken care of since his parents abandoned him after a farming accident.

Through a series of flashbacks, Riley examines the girls’ lives on the compound, then reaches further back to how Amaranth came to be involved with Zachariah. In Amity & Sorrow, none of the characters are without a burden.  We learn that although Zachariah was raised FLDS, he was, like so many other young men, kicked out, and his own religion contains only aspects of fundamental Mormonism. This frees Riley to incorporate a variety of intriguing and unique details, while still referring to a framework that readers will understand. Unfortunately, we never see much of the charisma the prophet must presumably have had in order to attract fifty wives to his cult. Although Amity often seems better adjusted than her sister, she believes that she has the power of healing in her hands. She also believes that this power can be used for evil, such as causing a miscarriage. Even kind Bradley struggles with the idea of giving shelter to a runaway wife, when his own wife has abandoned him, and he is not without his own secrets.

Riley leans heavily on references to The Grapes of Wrath, which serves as a touchstone for the novel. Whereas the Joads in Steinbeck’s novel left Oklahoma for California during the Dust Bowl, Bradley is part of a family that stayed behind and continued to farm there. In fact, Bradley is his family name; we never learn his first name. Amaranth, by contrast, began her life in California, a hippie love child in the shadow of Disneyland, but her journey brings her to Oklahoma. In some ways, it is a more hardscrabble existence than even life on the isolated compound they fled. They are dependent on Bradley’s charity, but every season Bradley must face the possibility of losing the family farm. It is also The Grapes of Wrath which reveals the heart-rending ignorance in which the children have been raised; Amity cannot read and doesn’t understand how to use a library, and she has never even seen a computer. More disturbing, however, is Amaranth’s abiding lack of concern for this state of affairs.

The major drawback to this title is the ploddingly slow pace, and Riley’s tendency to cloak everything in euphemisms so that it is difficult to determine with any certainty what is going on. In this way, readers are kept as ignorant as the two sisters, struggling to piece together an unfamiliar world. The characters are strong and well-rounded, but often not especially likeable, so that is hard to ask them to carry the reader through when the plot lags. The slightly stilted prose style, while appropriate to the subject and characters, is difficult to become immersed in. Combined with the sad and often disturbing subject matter, it was simply difficult to get through. Compelling at some moments, and horrifying at others, Riley asks hard questions, and provides no easy answers.