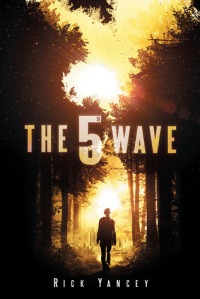 “The Hum is gone. You remember the Hum. Unless you grew up on top of a mountain or lived in a cave your whole life, the Hum was always around you. That’s what life was. It was the sea we swam in. The constant sound of all the things we built to make life easy and a little less boring. The mechanical song. The electronic symphony. The Hum of all our things and all of us. Gone. This is the sound of the Earth before we conquered it. Sometimes in my tent, late at night, I think I can hear the stars scraping against the sky. That’s how quiet it is. After a while it’s almost more than I can stand.”

When a satellite image of an alien spacecraft was spotted off Mars, humans received confirmation they were not alone in the universe. For ten days humanity waited for the mother ship to arrive, and hoped that the visitors would be friendly. On the tenth day, the Others sent out an electromagnetic pulse that destroyed Earth’s transportation and communication systems. That was the first wave. Since then the human population has been decimated by three more waves of attack. But the fourth wave has perhaps been the worse; the aliens are wearing human faces and no one can be trusted. Survival has become a hopeless paradox; you must be alone to survive, but together to have any hope of fighting back. Since losing her parents and being separated from her brother, Cassie Sullivan’s policy has been that to stay alone is to stay alive. But when she is shot in the leg by one of the Others’ Silencers, she has no choice but to trust Evan Walker. Not only is he her only hope for survival, he may be the only person who can help her rescue her brother

The POV rotates between Cassie, Evan, her brother Sam, and a teenage military recruit known to his squad as Zombie. Cassie is snarky and a little bit funny, while Zombie’s narrative voice hardens as he goes through basic training and becomes soldier. Sam’s narration doesn’t quite manage to capture a five year old, but his experience provides information that is important to the narrative. Although the chapters aren’t labelled as to who is narrating, it’s usually quite easy to figure out (except when Yancey deliberately obscures their identity, which is the case in at least two chapters). Yancey also has an excellent knack for imagery and analogies, although some of these ideas and turns of phrase are used by multiple characters independently, which comes across as incongruous. Chess, cockroaches and especially the idea of bodies as battlefields appear as cross-character motifs.

Although largely dystopian sci-fi, there is a distinct element of mystery to The 5th Wave that will keep you turning the pages. With communications systems knocked out, and humans unable to trust one another, no one has enough information—there is a lot of confusion, speculation, and guess work. Elements that at first seem like plot holes or continuity errors often turn out to be part of this confusion. Pay attention to the elements that don’t add up, because this is a book that will keep you on your toes the whole way through.

As I was reading, I was struck by a number of similarities between the premise of this book and Stephenie Meyer’s The Host. The aliens are inhabiting human bodies, and experiencing human feelings and emotions. Against their better judgment, some of the aliens have become intrigued by humanity. Cassie, like Melanie, has lost her parents, but is dedicated to her younger brother. However, that is largely where the similarities end. Where The Host was a romance with a window dressing of science fiction, The 5th Wave is science fiction with the barest hint of romance. In many ways, The 5th Wave is the book The Host could have been if Meyer had gotten serious about the sci-fi elements.

Although there isn’t a great deal of romance in The 5th Wave, the romance that is present fell terribly short of my expectations. I tweeted this a couple days ago, but let’s say it once more for good measure: authors, having your heroine say NO and your love interest ignore her IS NEVER ROMANTIC. Rape makes me want to rage quit your book (and knocks at least one star of whatever I might have rated it otherwise). The 5th Wave is a gritty, thrilling and largely enjoyable page-turner, but framing the romance this way makes it difficult to engage with what will undoubtedly be a key element of the plot as the series goes on.

Looking for a little more romance and a little less sci-fi? I recommend The Rules by Stacey Kade.