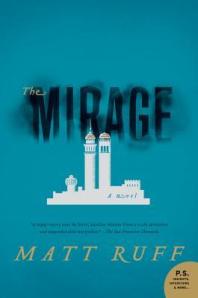 “Looking him in the face, Samir saw the same Idris he had known and feared back in grade school: a religious thug who claimed to love God, but who also loved bullying—and therefore loved sin, as a pretext to violence. You disgust me, his expression said. I’m so glad you disgust me. Now I can hurt you with God’s blessing.”

What if 9/11 never happened? What if, on November 9, 2001, a group of Christian fundamentalists had attacked the Tigris and Euphrates World Trade Towers in the Middle East? In the summer of 2009, three Arab Homeland Security agents capture and interrogate a thwarted Christian suicide bomber. However, while Mustafa al Baghdadi is questioning the prisoner, the terrorist makes an extraordinary claim. According to the bomber, there is no such thing as the United Arab States. The world in which it exists is nothing but a mirage created by God to test the faithful. In the real world, the United States is a great superpower, one that has been attacked by Muslim terrorists. Together with his colleagues, Amal bint Shamal and Samir Nadim, Mustafa begins investigating the legend of the mirage. They discover that their bomber is not the only terrorist who has made this claim. Senator Osama Bin Laden, and his secretive military organization, Al Qaeda, are also aware of the myth, and will stop at nothing to discourage Mustafa’s investigation. The legend has also attracted the attention of the mobster Saddam Hussein, who has been enthralled by the vision of a world in which he is the President of a nation rather than a corrupt labour union.

The alternate history Matt Ruff creates in The Mirage is a masterful feat of world building. He conjures up an Islamic super state that is nothing like the flat Sharia nightmare most Americans would probably imagine. Much of this world building is achieved through the clever use of a Wikipedia-like online resource known as The Library of Alexandria, which contextualizes persons and events without wedging clunky exposition into the dialogue or narration.
Ruff has a knack for taking details and spinning them until they’re turned to a revealing angle. It is enormous fun to try to identify the numerous parallels between Ruff’s world and our own. Real-life political figures appear throughout, their careers, but not their personalities, altered by the circumstances of the mirage world.

Unfortunately, the world is better and more important than the characters or the plot, both of which could be taken directly from a conventional police procedural, at least until things get mystical. As the investigation uncovers disturbing artefacts from the lost world, the characters increasingly experience moments of déjà vu as the mirage begins to come unravelled. Unfortunately, the plot starts to unravel at this point too, leading up to a less than satisfactory ending.

Part fantasy, part mystery, part sharp political satire, Ruff continues his reputation for blending (or defying) genres in a novel that is guaranteed to up-end your expectations.

One thought on “The Mirage”