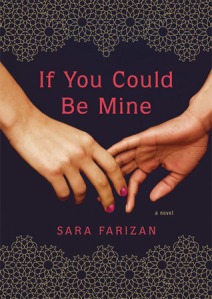 “Even at age six, I wanted to marry her. I told my mother when I came home after playing with Nasrin, who lived a few houses down from our apartment. Maman smiled and said I couldn’t marry Nasrin because it was haraam, a sin, but we could always be best friends. Maman told me not to talk again about wanting to marry Nasrin, but it was all I thought about.”

Sahar and Nasrin have been best friends since they were small girls, but more than that, they are in love. Iran is a dangerous place to be gay, but Sahar holds out hope that she and Nasrin will find a way to be together. Sahar is smart, and one day she will be a doctor, capable of supporting herself and Nasrin. But Nasrin finds it difficult to believe it will ever be possible for them to be together, so as the end of high school nears, she agrees to an arranged marriage with a handsome young doctor her parents have chosen for her. If homosexuality is haraam, adultery is even more dangerous still, and Sahar sees no way that they will be able to hide their love from Nasrin’s husband. But then Sahar learns that while homosexuality is illegal, to be a man trapped in a woman’s body is not, and the state will even pay for gender reassignment surgery. Sahar must decide how much of herself she is willing to sacrifice in order to be with Nasrin.

As a young adult novel, If You Could Be Mine offers a rare opportunity to discuss the differences between gender identity and sexual orientation by examining the different situations faced by gay and transgender people in Iran. It is an unusual reversal of the North American situation, where being gay is much more readily accepted than being transgender. Although the main character is not transgender, and is actually coping with what it means to be gay in Iran, her desire to find a legal way to be with Nasrin brings her into contact with people who have transitioned, and are also sympathetically portrayed. Further, the idea that Sahar may become a man allows room for the story to examine the privileges she would suddenly have access to if she was no longer a woman. And although Nasrin and Sahar are best friends, issues of wealth and class complicate their relationship, as do the differences in their levels of academic accomplishment, allowing for a fuller portrait of contemporary Iranian culture.

If You Could Be Mine is Sara Farizan’s first novel, and while it is largely well done, the set up and narration are somewhat awkward and heavy-handed at times. The novel was also on the short side, and I think Farizan could have used more room to tell her story. However, the plot captured me, and even had me tearing up in parts. I will look forward to seeing Farizan’s writing style develop in future novels.

Already read If You Could Be Mine? For another book set in the Middle East, check out And the Mountains Echoed by Khaled Hosseini. For another book about gender identity, try Golden Boy by Abigail Tarttelin.

This title fulfills the LGBT requirement for my participation in the 2013 Eclectic Reader Challenge hosted by Book’d Out.

7 thoughts on “If You Could Be Mine”