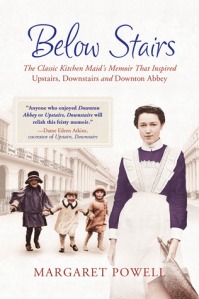 “It was the opinion of ‘Them’ upstairs that servants couldn’t appreciate good living or comfort, therefore they must have plain fare, they must have dungeons to work in and to eat in, and must retire to cold spartan bedrooms to sleep. After all, what’s the point of spending money making life easier and more comfortable for a lot of ungrateful people who couldn’t care less what you do for them? They never tried, mind, to find out if we would have cared more by making our conditions good and our bedrooms nice places in which to rest. No, it wasn’t worth spending your money because servants never stayed with you, no matter what you did for them.”

Margaret Langley Powell was born into a working class British family in Hove, in 1907. Her parents were poor, so despite her good grades she left school at thirteen to start working. After being fired from a laundry that didn’t want to give her a raise when she turned fifteen, her mother decided there was nothing else for her to do but go into service. Powell started out as a kitchen maid, the lowest position among the household staff, but the only way to eventually become a cook, one of the most respectable household jobs. Going into service was a marked change, because it meant living under her employer’s roof. Her first job paid £24 a year, and she received one afternoon and evening off a week, and alternate Sundays. Kitchen maids worked excruciatingly long hours, rising at 5am and sometimes working until 8pm. Bedrooms were shared with other servants, and there was little privacy or free time to be had. Powell left service to be married, and eventually went back to school and achieved her “O” levels when she was 58 years old. Her memoir was originally published in 1968, and has been reissued as one of the inspirations for Julian Fellowes’ popular series, Downton Abbey.

Powell clearly and articulately captures the difficulties and indignities of life in service, which was often a study in contradictions. It was respectable to leave a job to be married, but being called on or stepping out with young men was an entirely undesirable trait in a female servant. Powell wryly remarks that “it seemed to me one was expected to find husbands under a gooseberry bush.” Nor were servants looked on as desirable wives by most young men. Many employers gave their servants as little as possible, on the theory that they were ungrateful, and would soon leave anyway. Of course, this lack of consideration made for unhappy servants and they did frequently move on to new positions. Powell once had a temporary position filling in for a sick cook in a household that treated its servants extremely generously, and she observed that “Lady Downall never had a servant problem.”

What some have described as bitterness struck me as straight up honesty, which Powell displays from the word go. She doesn’t sugar coat her childhood or the difficulties of life in service, but nor does she come across as petty or mean. She tells tales, but nothing overly private or scandalous, and there’s a good probability she could have said worse if she’d been so inclined. However, her strong sense of individuality and human dignity was obviously not well suited to the type of life she was expected to live in service, with its constant reminders of her lesser status. Unsurprisingly, real life in service is neither as romantic nor as dramatic as its portrayal on shows such as Downton Abbey. However, Powell gives the real historic flavour of the period, which is appealing in its own right.