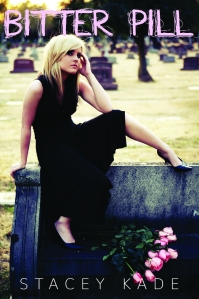 Disclaimer: I received a free review copy of this book through CLP Blog Tours.

“It’s just that whenever bodies started floating, swinging or, in this case, dropping, I happened to be there. Bad luck, maybe. Still, worse luck for them than for me. This time, it was some very poor fortune for Doc Hallacy, the pharmacist.”

After getting married young and divorced not much older, Rennie Harlow moved from Chicago, back to the small town of Morrisville where she grew up. She lives in an apartment above her mother’s garage, and scrapes together a living by freelancing for the local paper, and doing any other kind of writing work she can find. She’s only been home for a year, but she’s already found two bodies, giving her something of a reputation with the local Sheriff’s office. So when she goes to the pharmacy early one morning to pick up a prescription for her mother, and finds the elderly pharmacist, Doc Hallacy, beaten to death with a cane, she gets to look forward to topping their suspect list once again. Fortunately, Rennie is both observant and persistent, so she knows that given half a chance, she can track the murderer down herself. And she might just get to spend a bit of time with Sheriff Jake Bristol in the bargain, even if she has to keep reminding herself that he’s married.

Bitter Pill is a page-turning small-town mystery, of the sort where everyone thinks they know each other’s business, but as Rennie delves into the mystery of Doc Hallacy’s death, she stumbles over more Morrisville secrets than she can shake a cane at. When everyone is keeping a secret of some kind, it’s hard to tell who might be keeping the secret of a murder. And this time around, Rennie is keeping a little secret of her own; her early morning visit to Doc Hallacy was to pick a “narcolepsy” prescription for her mother, a known hypochondriac. Doctor Murphy, Doc Hallacy, and Rennie have been conspiring to mislabel her bottles and dose her with anti-anxiety medications instead, but with Doc Hallacy dead, Rennie will also have to contend with the difficulties in her relationship with her mother, and grapple with whether or not to reveal Doc’s highly illegal practices.

I read this relatively short mystery in a single sitting, and really enjoyed it, but the one thing I was unsure of with this book was the premise of Rennie’s involvement in the case. I was perfectly ready to buy the idea of her unofficially pursuing the killer even after her editor at the local paper takes her off the story, but it was a bit weird the way Bristol kept trying to make her involvement official by asking her to come the reading of the will, etc. He actually says that it is because “she’s the best witness I’ve got,” and I really didn’t know whether this was supposed to be a legitimate reason or merely an excuse because Jake wants to spend time with Rennie as much as she wants to spend time with him. As a legitimate reason, that’s pretty lame, but since the story is from Rennie’s POV, we don’t really get into Bristol’s head to find out what he’s thinking, so we can only go by Rennie’s inferences, which all point towards Bristol doing his best to keep himself out of a sticky situation with her.

Stacey Kade originally published this book under the same title as Stacey Klemstein back in 2008, so my hope is that this relaunch means more Rennie Harlow mysteries to come. Rennie obviously has an interesting back story, and Bitter Pill ends with some unanswered questions that are ripe for a sequel. The series is off to a good start, and I’m itching to know what other secrets the people of Morrisville are keeping.

Want to win a signed copy of Bitter Pill? Head over to the CLP tour page, and leave a comment, and you’ll be entered to win!