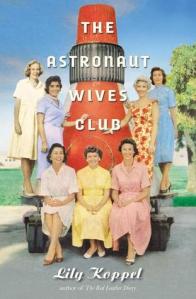 “Divorce was taboo at the space agency, which believed that stable home lives were essential for success in orbit. One of the first among NASA’s many unofficial rules was: if you don’t have a happy marriage, you won’t have a spaceflight.”

In 1959, the Mercury Seven astronauts were announced to the American public, drawn from a pool of military test pilots. The men were not alone in being catapulted into the limelight; the wives of these astronauts went almost overnight from being poor military wives to national celebrities, featured on the cover of Life magazine, and transformed into early reality stars. Although their husbands’ salaries remained modest, the perks granted to the astronaut families by a variety of companies from car dealers to homebuilders, enabled them to live large, gallantly projecting the image of the perfect American family to the public. Behind the closed doors of the astronaut suburb of Houston dubbed Togethersville, the wives often had to function as single mothers and cope with the very real dangers of their husbands’ work. Fear was not to be displayed in public, and psychiatry was taboo, leaving the women to support one another as they raised their children and watched their husbands take on tasks even more dangerous than those they had faced in their military careers. In many cases, the friendships between the wives outlived the marriages that made them possible as the culture of infidelity among the astronauts eventually led to one divorce after another.

The Astronaut Wives Club tells the well-known story of the space race from the ground, emphasizing the experiences and trials faced by the wives who were balancing their husbands’ rivalries to be first in space with their own needs for support and friendship from those who understood what they were going through. Maintaining the image of a good home life was perceived to be crucial by the astronauts and their wives alike, given traditional attitudes at the space agency. Trudy and Gordon Cooper had been separated in the lead up to the Mercury Seven announcement, but she agreed to reunite with him to bolster his chances of being selected for the program. If she was often perceived as inscrutable by the press, it was because she didn’t want anyone to find out about the separation, potentially jeopardizing her husband’s position as the astronauts jockeyed to be first to fly. Marge, wife of Deke Slayton, kept her own secret of a previous marriage and divorce, for similar reasons. John Glenn played a crucial role in squelching a story about Alan Shepard’s infidelities, persuading the reporter that the image of the astronauts was a matter of national security. Glenn tore Shepard a new one for tarnishing NASA’s reputation as they fought the Soviets for space supremacy, but he was perceived as something of a prude by the other astronauts, and infidelities with girls on the Cape became the norm, while the wives stayed home with the kids in Houston.

The ranks began to swell in 1962, when the New Nine astronauts were announced for the Gemini missions. They would grow again in 1964 when fourteen more astronauts were selected for Apollo, and another nineteen would be added in 1966. As the numbers grow, it becomes harder to keep track of the women, so it is inevitably the stories of the Mercury wives that stick with the reader afterwards. Lily Koppel uses a familiar style, referring to the women by their first names, but as more women are added and the names begin to duplicate, it becomes hard to keep track of who is being talked about if you can’t remember which wife goes with which husband. It becomes more and more difficult to do each story justice, and significant events get glossed over in a matter of paragraphs. I was torn between wanted a more focused narrative and wanting to hear the stories of all the wives, and I suspect that the author faced the same problem.

In addition to more astronauts, the 1960s bring a crucial shift in the narrative, with the beginnings of the feminist movement, and the first astronaut divorce between Donn and Harriet Eisele in 1969. Even then, Harriet was pressured by NASA to wait until after Donn’s 1968 Apollo 7 mission. Their marriage faced the added stress of losing a child to leukemia, but it nevertheless kicked off a trend, until eventually only seven of the original twenty-seven astronaut couples remained together. Many of the wives later go on to interesting careers, and I wanted to hear more about Rene Carpenter’s television show, and follow Trudy Cooper—who was a licensed pilot before her husband—as she finally achieved her dream of flying in the Powder Puff Derby.

Koppel weaves a compelling narrative of independence, and quiet courage in the face of crisis juxtaposed with denial and greed as the wives snatched up the free perks they viewed as their rightful compensation for being left behind, and tried not to think about the Cape Cookies who were sleeping with their husbands when they weren’t at home. However, Koppel sometimes affects a cheerful, folksy tone, presumably to try to evoke a southern 50s feel, using terms in her narrative prose such as “those godless Soviets,” and “prob’ly,” and other colloquial language that feels a bit forced, like a caricature of the period she is trying to portray. Lacking in academic rigour or even citations, this is more of a memoir written by an outside author than a real work of history, but Koppel gives you a feel for the situation, and it certainly makes for a compelling drama that had me picking up The Astronaut Wives Club in preference to the novel I was reading at the same time. Fans of Mad Men will want to look for the newly announced TV series based on this book that is slated to air this summer on ABC.

Argo: How the CIA and Hollywood Pulled Off the Most Audacious Rescue in History

3 thoughts on “The Astronaut Wives Club”