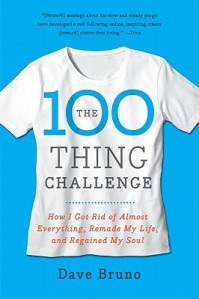 “Life is just about the same without an abundance of stuff—shhshh, quiet now—except without all that crap, there’s more room for living life to the fullest.”

In 2007, Dave Bruno realized he was a hypocrite. Although he was blogging about fighting back against consumerism, the amount of time his family spent cleaning their house one weekend made him realize how much stuff they had. In an effort to live the life he had been writing about, Bruno decided to spend a year with one hundred personal items or less, selling or giving away everything else. This was a personal challenge that didn’t apply to his wife and children, or any of their shared possessions, but he ended up with a lot of company. As Bruno blogged the countdown to the start of the 100 Thing Challenge, slowly whittling down the number of his possessions over the course of a year, he struck a cultural nerve, inspiring fascination and imitation. In the process, he distilled what was really important to him, and let go of detritus from his past that was holding him back.

A key part of the challenge was decided what counted as an item. Bruno did not include possessions shared with his family, such as furniture, appliances, and dishes. He also chose to count his library as a single item, a decision I suspect most book lovers can sympathize with.  If you’re inclined to grant him the right to define the parameters of his own challenge, you will probably be a little but annoyed with the constant justification of what counts as an item. If you are more pedantic, you will probably be annoyed by the wiggle room Bruno leaves in the rules. Between the two, there will be a lot of people unhappy about how Bruno went about the challenge. He also allowed himself one week to decide whether to keep or get rid of any gifts he received, and made a rule that if he was going to replace something, he had to get rid of the original item first.

Regardless of how Bruno went about the challenge, there were valuable insights, many of which came from the process of shedding possessions rather than the challenge of living without them. Bruno owned a large number of model trains, and fantasized about building an elaborate model train layout for them, as he and his father had always talked about. Bruno sold the trains for the challenge, finally coming the realization that he had never built a layout because doing so now would not make up for the fact that he and his father had never done the project together. Similarly, Bruno sold most of the contents of his woodworking shop, a hobby which he realized was more aspirational that factual. He kept some practical tools for regular chores and home repairs, but gave up the more complex woodworking equipment that he rarely used, realizing that woodworking was more about something he wished he was good at than something he wanted to make the time to master.

Although Bruno has some interesting insights, the book goes off the rails with frequent tangents that are not well tied in to the rest of the book. For example, Bruno makes frequent references to his Christian faith. It would have been easy to integrate this aspect better by talking about Biblical vows of poverty, but perhaps there was a clash between the desire to write a book that would appeal widely, and one that would clearly show how the challenge, for Bruno, was strongly connected to his faith. The concept of The 100 Thing Challenge isn’t inherently religious, but I got the sense that faith was an important part of it for Bruno, but one that wasn’t fully discussed in the book. However, not all of the references to faith made sense even if they had been better contextualized. I was particularly puzzled by one story about a lone female hiker Bruno encountered on a solo camping trip. At first the anecdote seemed to be about how all the gear in the world can’t make you into an expert outdoor adventurer, but it somehow devolved into a story about how the woman was Satan, sent to tempt Bruno to infidelity.

Overall, Bruno’s concept of using the 100 Thing Challenge to think about why you own or buy something was thought provoking, but his actual discussion of the challenge was not particularly well executed. I remain fascinated by the idea behind The 100 Thing Challenge, but I find the movement that has sprung up around it much more interesting than Bruno’s account.