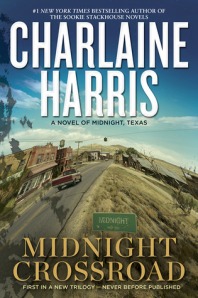 “The really inquisitive ones always go to Midnight Pawn. It’s an old building, the oldest building in town. In fact, it was there before the town grew up around it, before there were two roads to intersect.”

Midnight, Texas is a tiny, one stop light town at the crossroads of the Davy Highway and Witch Light Road. Everyone in Midnight has a secret and a past, from Bobo, the owner of a slightly unusual pawnshop that’s open at night, to Fiji, the only witch for miles around, to Manfred, the internet and telephone psychic who has just moved to town. Everyone is friendly to the newcomer, but there seems to be some sort of unspoken code amongst the Midnighters, who are tight knit but ask no personal questions. When Bobo’s girlfriend, Audrey, turns up dead after everyone thought she’d left him, the town finds itself at the center of a murder investigation that threatens to stir up the reclusive residents’ secrets.

Midnight Crossroad gets off to a slow start, introducing the town of Midnight and its unusual residents. Charlaine Harris still seems to be finding her feet juggling multiple third person perspectives. It is about a third of the way into the book before the mystery is really afoot, and things pick up a bit from there. Harris ties this story into her larger universe, populating Midnight with familiar faces, including Bobo Winthrop the Lily Bard mysteries, Arthur Smith from the Aurora Teagarden books, and Manfred Bernardo from the Harper Connelly series. Harper Connelly herself was reportedly going to play a role in Midnight Crossroad but didn’t make it into the final draft. Speaking at University Bookstore Seattle on May 8, Harris seemed surprised that this tidbit was public knowledge, but admitted that Harper was going to help move along the detection aspect of the story before she was cut for taking over too much of the book. Harris also shared that a character from the Sookie Stackhouse books will be appearing in volume two.

Midnight Crossroad was a solid mystery, but the setting didn’t have a chance to live up to its potential in this volume even though a lot of attention was lavished on it. Although the idea for the Midnight books started with the unusual pawn shop—the original title was Midnight Pawn, but  Harris’s southern drawl made pawn sounded a little too much like “Midnight Porn” to her British publisher—the more unusual customers and artifacts in the pawn shop don’t play any significant role. Nor, to my disappointment, was crossroad the site of any devilish dealings. Despite the many supernatural residents of Midnight, the events of this book are decidedly mundane. However, Harris has set a lot of promising groundwork, with a diverse and mysterious cast of characters and her signature southern setting. Book two in the planned trilogy—which may go on longer if Harris feels she has more to tell—is due out this time next year.