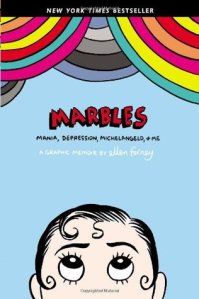 “Sometimes it seems like ‘pain’ is too obvious a place to turn for inspiration. Pain isn’t always deep, anyway. Sometimes it’s awful and that’s it. Or boring. Surely other things can be as profound as pain.”

In 1999, shortly before her thirtieth birthday, cartoonist Ellen Forney learned she had Bipolar I Disorder. Diagnosed at the height of a manic episode, and terrified that being put on medication would destroy her ability to make art, Forney resisted treatment until she sank into a black depression that forced her to admit she needed help. Even as she accepted the need for treatment, she became fascinated with what she called “Club Van Gogh,” the long list of famous artists known to have suffered from mental illnesses. Documenting the four year journey to finding the right combination of medications, Forney explores the associations between mental illness and creativity, and how the relationship between the two complicated her feelings about the psychiatric medications prescribed to balance her emotional states.

Marbles introduces Forney in the midst of a manic episode, blithe and philosophical, and more than a little impulsive. Chapter two is a clinical contrast, showing Forney in her psychiatrist’s office reviewing the DSM list of symptoms for Bipolar I, and facing the stark realization that her “own unique personality was neatly outlined right there, in that inanimate stack of paper.” From there, she delves into the long list of famous artists with mental illnesses, many of whom attempted or committed suicide. Marbles shows what life is like with bipolar, acquaints readers with the clinical reality of treatment, and explores Forney’s personal concern with the stereotype of the “crazy artist.”

Forney uses the graphic medium to depict her illness to great effect. Her art manages to embody the frantic exhilaration of her manic state in one chapter, and the dark, lethargic depths of depression in the next. Wild, overflowing panels convey mania, while darker, spare, and constrained panels depict depression.  Although the illustrations are all black and white, it is easy to imagine the manic pages bursting with colour. On page 77, with a series of simple line drawings, she succinctly captures a day in the life of a depressed person. Jam-packed two page spreads, while less neat, clearly express mania. Equally fascinating are Forney’s numerous self-portraits from this time, an indication of her struggles with identity in her radically different states. This draws an interesting parallel to Vincent Van Gogh, perhaps the most famous “crazy artist,” who also painted numerous self-portraits.

Extremely candid and open, Forney shares the reality of living with bipolar disorder with humour and intelligence.

This title fulfills the Graphic Novel requirement for my participation in the 2014 Eclectic Reader Challenge hosted by Book’d Out.

7 thoughts on “Marbles: Mania, Depression, Michelangelo, and Me”