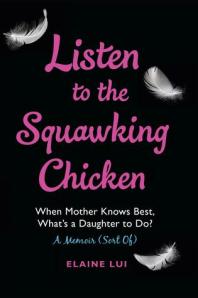 “I am the Squawking Chicken’s only daughter and her only true friend. It can be a burden, sure. But mostly it is my life’s honor.”

Elaine Lui is better known as Lainey, author of the popular celebrity smut website Lainey Gossip, and one of the hosts of CTV’s Etalk. But the real star of her memoir is her mother, who bears the unenviable Chinese nickname Tsiahng Gai, or Squawking Chicken. Born to a poor family in Hong Kong, where she acquired her unflattering nickname for being loud and assertive in a culture that expected women to be dainty and shy, Lui’s mother immigrated to Canada after she married. With a combination of Feng Shui blackmail and large helpings of shame, she raised her daughter in Toronto, where her parenting style was very much at odds with prevailing culture.

Feng Shui plays a prominent role in the Squawking Chicken’s efforts to shape her daughter’s behaviour. For her part, Lui sometimes finds practical lessons in her mother’s unusual stories and supernatural beliefs. When Lui’s uncle berates his daughter to “walk like a lady,” the Squawking Chicken casually bats down his sexism by saying “my grandfather always told me to walk like an elephant. It scares away the ghosts. Ah Leuy [my daughter], you should always walk like an elephant. A real woman doesn’t creep into a room.” On another occasion, Lui found a bracelet on the subway and wanted desperately to keep it. Her mother flatly refused, telling the story of a pair of ghosts that hitch hiked into a house on an umbrella picked up on the street. From this Lui draws a lesson about not coveting other people’s possessions.

Just as often, however, Lui simply buys into her mother’s supernatural beliefs in a way that makes her story very unsatisfying for the skeptical reader. Lui likens the belief in Feng Shui to a religion, a not inaccurate comparison, in that she simply has to have faith since her mother frequently refuses to tell her why she must submit to certain Feng Shui practices. Lui has been eating a papaya every day for years, despite the fact that she doesn’t like papayas, because her mother said she should, but refuses to say why. Nevertheless, Lui is constantly looking for evidence in her life to confirm these beliefs, even though she knows that her mother will say a certain coloured dress is bad Feng Shui when she doesn’t like the cut, and approve a different style of dress in the same colour a week later. These baffling inconsistencies in Lui’s attitudes towards Feng Shui go unexplained. Lui is certainly capable of being critical of her mother, but that criticism is selective.

Lui’s tale is told with humour, and the willingness to embarrass herself as much as the Squawking Chicken, as she lays bare the unique relationship between an immigrant mother and her first-generation-Canadian daughter. Lui writes well and pulls no punches, but their unique mother-daughter bond has off-putting aspects that humour cannot hide. Certainly, many Westerners will be discomfited by the Squawking Chicken’s unorthodox parenting, but what killed this memoir for me was that such a large part of it was not really about listening to your mother, who has lived longer and wants what’s best for you; so much of it was not about the wisdom or practicality of her mother’s advice, but rather amounted to submitting unthinkingly to astrology and superstition.