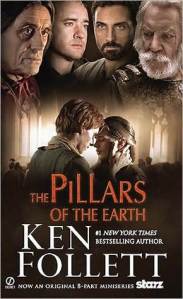 Tom Builder is a master mason who dreams of building a grand cathedral, but must mostly be content to build stone houses for minor lords, and teach his son, Alfred, his trade. Philip of Gwynnyd is the young head of a cell of monks at St. John-in-the-Forest, a small outpost of Kingsbridge Priory. In only three years, Philip has reformed the cell and made its farm profitable. When a visit from his brother sends Philip stumbling into the complex rivalry of church and state in twelfth century England, a devil’s bargain with Waleran Bigod, an ambitious aid to the Bishop of Kingsbridge sees Philip unexpectedly elevated to Prior of Kingsbridge. The deal offers Philip the chance to reform Kingsbridge Priory and rebuild its crumbling cathedral, but his every move is dogged by his mistrust of Waleran, and the political ambitions of the new Earl of Shiring.

Ken Follett fits his tale into the cracks of history, referencing known events and famous figures, but setting the story at a fictional priory, and focusing on a broad cast of invented characters. The war of succession between Stephen of Blois and the Empress Maud forms the context of the story, as law and order crumble, leaving ample room for local power skirmishes with little hope of intervention by the Crown. Follett tells his story simply, but carefully, so that the myriad disconnected events slowly fit together into a complex narrative with a sweeping scope. The book is one for those who don’t mind history and architecture, and getting into the details of a contested succession, and the anatomy of a cathedral, though there is certainly no shortage of action.

Even as a miniseries rather than a movie, The Pillars of the Earth is overflowing and a bit frenetic, struggling to cram in the fifty years of events covered in Follett’s novel. Many scenes are barely set before a character is thrust unceremoniously onstage to deliver a hasty bit of dialogue and then hustled off. There is little time for subtlety or finesse as the plot is hurried along. The acting is generally strong, with most of the false notes coming from scenes that are too rushed to allow the interactions to feel natural. Ian McShane is particularly noteworthy in his turn as Bishop Waleran. Follett tells us that the Waleran of the novel is a man of deep faith despite his political methods and high ambitions, but McShane does a wonderful job of illustrating this aspect of Waleran’s character as he engages in mortification of the flesh, and prays rapturously at the feet of the miraculous weeping Madonna statue.

Follett’s novel comes with plenty of built-in melodrama and violence, so I was bemused by the many adjustments for the miniseries that seemed to be aimed at amping up the conflict and excitement, such as when Jack and Walter duel for the rights to mine the Shiring quarry. Another character’s tragic but accidental death becomes a brutal outright murder. The characters’ already lofty highs become stratospheric, and the lows are positively hellish. The Hamleighs of the novel were already rather one-dimensional villains, and the addition of incest and intrafamilial murder simply makes them seem totally overwrought. Meanwhile, the Kingsbridge cellarer, Cuthbert Whitehead, gains an unrepentant whore for a sister, and Subprior Remigius gets a backstory as a secret sodomite. While adaptation necessitates change, the miniseries might have been better served by focusing on streamlining this megalithic story rather than fleshing out minor characters with scandalous details.

Follett’s narrative voice is straightforward, but the scope of his story is epic, and intricately plotted. The Pillars of the Earth is a carefully constructed novel, with each piece of the plot supporting and introducing another. The series adapted from it is much more sloppily built, sacrificing some of these elaborate connections for unneeded additional drama.

Argo: How the CIA and Hollywood Pulled Off the Most Audacious Rescue in History

7 thoughts on “Page to Screen: The Pillars of the Earth”