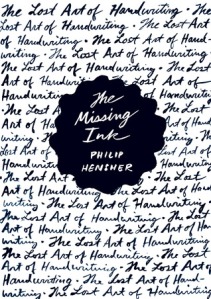 “At some point in recent years, handwriting has stopped being a necessary and inevitable intermediary between people—something by which individuals communicate with each other, putting a little bit of their personality into the form of their message as they press the ink-bearing point onto the paper. It has started to become an option, and often an unattractive, elaborate one. Before handwriting goes altogether, we might look at what it has meant to us, and what we have put into it.”

One day, British author Philip Hensher realized with a jolt that he did not know what the handwriting of a close friend looked like, even though they had known one another for upwards of ten years. The realization sparked both a sense of loss, and curiosity about the long life of handwriting as a method of communication. In The Missing Ink, Hensher has transformed his nostalgia about the decline of the art of handwriting into a retrospective on the history of the medium. Combining personal reminiscences, subject interviews, and history, Hensher creates a picture of handwriting that draws examples from North America, Britain, and Europe. His subjects vary across a broad range, from the invention of the ubiquitous Bic Cristal ballpoint pen, to the varied schools of teaching handwriting, to the role handwriting has played in English literature.

Our long attachment to the pen makes it a somewhat remarkable technology. Hensher theorizes that “technologies are either warm or cold, either attached to us with their own personalities, or simple, dead, replaceable tools to be picked up and discarded. The pen has been with us for so many millennia that it seems not just warm, but almost alive, like another finger.” Hensher hits on something by linking that sense of warmth and personality to longevity. People have very similar feelings about the warmth and tactility of the codex, another technology that has been with us for millennia. Undoubtedly, time will eventually bestow a similar warmth on whatever technologies emerge from the current shift and prove similarly durable. Pens, however, are losing some of that warmth and attachment. A stranger will probably lend you their pen, but be extremely reluctant to hand over their cellphone, a much more personal (not to mention expensive) tool. Even a friend might be reluctant to hand theirs over.

In talking to people about their handwriting, Hensher identifies a certain cognitive dissonance commonly attached to it: “We seem to believe both that handwriting doesn’t matter, since everyone types, and that when people do write a handwritten letter, it ought to be elegant, graceful, and well practised.” Self-consciousness about our own handwriting is perpetuated by our own tendency to judge other peoples’ handwriting. Even Hensher is guilty of sniping about “fat Denise’s” “obese handwriting,” and deriding the masculinity of any man who would dare dot his “i” with a circle, let alone a heart. These jabs may have been attempts at humour to leaven a dry topic, but they end up seeming condescending and mean. But the tendency to judge people by their writing is an old one that has sometimes been taken very seriously. In the late  nineteenth century, it coalesced into a pseudo-science known as graphology, which claimed to be able to decipher a person’s character based on their penmanship. This preoccupation shows up in the fiction of the period, from Dickens to Proust, and is even used by Sherlock Holmes to profile a suspect. More interesting still is the belief some handwriting crusaders had that improving your handwriting could actually improve your character.

Inevitably, there is a certain hint of technophobia to the hand-wringing about the decreasing use of handwriting. Interestingly, amidst all this worrying, it goes entirely unmentioned that philosophers once worried that writing things down would be the end of human thought, as we let our memories stagnate while relying on writing to preserve knowledge for us (see, for example Phaedrus by Plato, circa 370 BC). Even the worry about the shift from handwriting to print is not new to computers, but goes all the way back to Gutenberg, and the argument about whether the Bible should be printed or hand scribed. Change always tends to evoke a mixture of worry and nostalgia, and Hensher has clearly captured that tension in The Missing Ink.

The Word Exchange by Alena Graedon