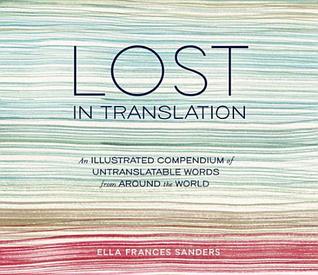 “The words in this book may be answers to questions you didn’t even know to ask, and perhaps some you did. They might pinpoint emotions and experiences that seemed elusive and indescribable.”

There is an immense satisfaction in finding a word to describe a feeling, idea, or experience you previously needed a phrase to explain. You feel both understood and vindicated, as if you knew all along you weren’t the only one who had felt that way, or had that experience. Sometimes that word just doesn’t exist in your native language. My personal favourite is fremdshämen, a German word meaning to feel embarrassed because someone else has embarrassed themselves. It is most useful for explaining why I don’t watch awkward comedies: “Sorry, but I will never watch The Office, because I would be too fremdshämen for the characters.” The Danish hygge and the French esprit de l’escalier are also invaluable additions to my vocabulary, though I hesitate to try to pronounce the first one. In Lost in Translation, Ella Grace Sanders has assembled an insightful illustrated compendium of such untranslatable words, presented in the form of a beautiful gift book.

Each word in the book gets a two page spread. On the left, Sanders identifies the language of origin, and provides a little bit of contextual information. On the right, the word is shown, along with a definition and accompanying illustration. Personally, I found myself reading the word and the definition first, and then going back to the left hand page to read about the language and context. In addition to giving you words your own language can’t provide, untranslatable words can give you an interesting form of insight into the cultures and languages that gave birth to these terms. For instance, half of the Swedish words that appear in the book relate to coffee, and indeed Sanders informs us that “Swedes have nearly twice the average per capita coffee consumption of the European Union.”  My Swedish father-in-law informs me this is because “coffee is what keeps Swedes sane.” And in keeping with their tradition of having the best words relating to feelings (see fremdshämen above), there is the German word kummerspeck, “literally meaning ‘grief-bacon,’ this word refers to the excess weight we can gain from emotional overeating.”

The beautiful design, colour, and illustration in Lost in Translation hint at the fact that is centered much more on art and emotion that linguistics. I ran several of the words past some of my more talented, multilingual friends, who found the definitions generally accurate. However, a Russian speaking friend noted that adding “a bittersweet feeling” to the definition of the verb razliubit (to fall out of love) made it sound more like a noun than verb. Indeed this was a fairly common problem with the book; in trying to best convey the sense and feeling of the word, Sanders often transformed nouns into verbs. For example, my Hindi speaking friends rendered the noun jugaad into English as “a makeshift solution” but the definition in the book “ensuring that things happen even with minimal resources” seems to refer to the action rather than the outcome. While Lost in Translation might fall a bit short in a technical sense, it more than delivers the emotional satisfaction of illuminating words with no English cognates that nevertheless convey something important about the human experience.

2 thoughts on “Lost in Translation”