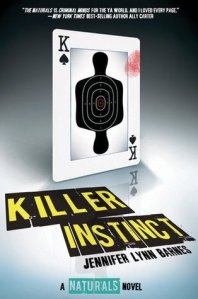 “If my instincts are so good, I wondered, then why didn’t I see this coming?”

Thanks to her natural talent as profiler, Cassie Hobbes has earned a spot in a secret FBI program that prepares gifted teens to enter the service. The Naturals are only supposed to work on cold cases, but they find themselves pulled into an active case yet again when a copycat killer starts mimicking murders committed by Dean’s psychopathic father. There’s a good chance the killer has been in contact with Daniel Redding, but there’s only one person Daniel will talk to. Just when Cassie thought she was making progress at getting Dean to let her in, revisiting his father’s murders causes him to push her away once more. At the same time, the Naturals program comes under scrutiny from above, when Director Sterling sends his daughter, Agent Veronica Sterling, to fill the space left by Agent Locke’s departure.

Jennifer Lynne Barnes again uses the device of new kills mimicking a cold case to pull the Naturals into the fray, getting around the prohibition on working active cases. This time, it is Dean’s past that is excavated as we learn about his father’s possessive behaviour, and his efforts to turn Dean into his protégé. The novel is a lot like a serial procedural drama, in that you could easily pick up the series from Killer Instinct, without reading The Naturals, but it is always better to know the backstory. And since there’s no avoiding mentioning whodunit in book one, it’s probably best not to read out of order. Even though the characters have special talents and insights, the mystery is fast-paced and suspenseful. Barnes conforms to the conventions of the genre, while also keeping you guessing. Interspersed with Cassie’s narrations are the eerie second-person “YOU” sections that take the reader inside the mind of the killer, offering tantalizing clues.

The hook of the Naturals series lies in combining the teenage sleuth with crime drama, and seeing what happens next. The Naturals program consists of damaged kids with secrets and hang ups and the group dynamic is complicated, both by their romantic entanglements and their ability to read one another. Cassie remains torn between Michael and Dean, while Lia is still running interference between them. Cassie and Lia’s relationship could use some development that goes beyond Lia’s sisterly protectiveness of Dean and jealous behaviour regarding Michael. Sloane is a bit of an outsider in all of this, as usual. But despite the conflicts, the group is further bonded together by their mutual dislike of Agent Sterling, and their desire to keep Dean from being hurt by being in contact with his father once again.

The title and cover for Naturals #3 are still under wraps, but Barnes has revealed that book three—due out November 2015—will be set in Las Vegas, and delve into the backgrounds of two more of the Naturals. Since Las Vegas is Sloane’s hometown, hopefully her backstory is due to be revealed. As much as I love Sloane’s social awkwardness and preoccupation with statistics, I wanted to see more from her character. We did get a flash, when her feelings were hurt because Cassie left her out of a plan. Hopefully, with Naturals #3 set in Sloane’s hometown, her backstory will finally round out an already interesting character. If you enjoyed book one, Killer Instinct delivers more of the same.

Check out Book One:

The Naturals by Jennifer Lynn Barnes