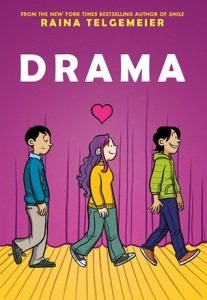 Callie has loved theatre, especially musicals, since attending a production of Les Miserables as a child. Quickly realizing that she couldn’t sing, Callie gravitated towards the stage crew of her middle school theatre group, where she becomes head of set design for the department’s production of Moon Over Mississippi.  There she struggles to realize her grand visions on a limited budget, particularly her dream of incorporating a spectacular cannon into the show. But the drama department also has plenty of rivalries and personal dramas, including relationships between the performers, and conflicts between the different technical departments. When two cute twin brothers join the show, Callie’s life in the drama department becomes even more of an emotional rollercoaster.

As in real life, Raina Telgemeier’s fictional drama department is a haven for misfits and gay kids, who are welcomed by their peers. Truly reminiscent of the middle school years—even for those of us who didn’t actually go to a middle school—Drama brings to life familiar scenes of friendship and early romances. It is a daring for a middle grade book in that it features a young gay character who is slowly starting his coming out process, figuring out how to tell his friends and family. Telgemeier’s story mirrors the structure of a play, incorporating different acts, and setting an intermission in the middle of the story than allows for a jump cut to the dress rehearsal, moving the story along nicely. Her familiar bright, cartoony style echoes her popular autobiographical comic Smile, as well as her work on the Babysitter’s Club comics.

Callie’s romantic life was a bit overly busy, including two crushes (not an unrealistic number), but also a friend with an unrequited crush on her, and being mistaken for a friend’s girlfriend, after she’s spotted hugging him when he comes out to her. The constant changes in direction in her love life did sometimes threaten to overwhelm the story of the play, but things were on track to work out relatively well, before Telgemeier goes in for one twist too many, and actually ends up undermining a powerful scene. However, Drama remains a thoughtful and sympathetic story that gives middle grade readers credit for being able to deal with subject matter that is often present in their own lives but absent from fiction intended for them.