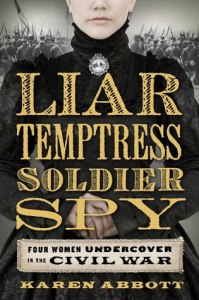 “War, like politics, was men’s work, and women were supposed to be among its victims, not its perpetrators. Women’s loyalty was assumed, regarded as a prime attribute of femininity itself,”

When the American Civil War broke out in 1861, women who were passionately dedicated to the Union or the Confederacy didn’t have the option of taking up arms to fight for their beliefs. In Liar, Temptress, Soldier, Spy Karen Abbott takes up the stories of four women who took matters into their own hands, and found a way to help their cause. On the Confederate side, Washington socialite Rose O’Neal Greenhow used her position inside the Union capital and connections within the government to smuggle information across the lines. In the South, seventeen-year-old Belle Boyd served as a spy and courier, thrilling in the adventure and romance of her job while supporting the Confederacy. In Richmond, the Confederate capital, Abolitionist Elizabeth Van Lew quietly placed an educated former slave with an eidetic memory inside the Confederate White House, and passed the intelligence she gathered across the lines to aid the Union army.  Perhaps most interesting of all is the case of Emma Edmonds, who disguised herself as a man named Frank Thompson, and enlisted in the Union army, where she served for two years before deserting to escape discovery. Edmonds was not even an American, but came from the British colony of New Brunswick, which would be among the first four provinces to join confederation and become part of the Dominion of Canada only a couple of years after the end of the Civil War. With the exception of Edmonds, these women succeeded in aiding their causes not just in spite of their sex, but partially because of it, taking advantage of social customs to do what the men could not.

Each of the four women at the centre of this narrative have a variety of motivations for their service going beyond mere political ideals. Edmonds was already living as a man before the war, having initially disguised herself in order to escape an arranged marriage to an older neighbouring farmer in New Brunswick. She worked in Michigan as a Bible salesman, and was strongly religious. When war broke out, she prayed, and came to believe that it was God’s will for her to enlist and support the cause of Abolition. She hoped mainly to serve as a nurse, but also worked as a mail carrier and an undercover spy, disguising herself as a woman on at least one occasion. On the other side of the lines, Belle Boyd sought more than just the defeat of the Yankees. Though Boyd obviously believed strongly in her cause, adventure-seeking and a desire for fame were also strong motivators, and ones that sometimes led to unwise actions on her part; it is difficult to be famous while also working successfully undercover. Boyd is a figure with admirable pluck, but her rashness and youthful romantic notions often worked at cross-purposes with her mission. Karen Abbott writes about her subjects in a familiar style, using first names and bringing the reader close to them. Her treatment is fairly even-handed, crediting the hard work and ingenuity of Boyd and Greenhow, even as they fall on the wrong side of history.

Although Abbott has chosen four figures to focus on, other interesting women appear in the background of the tale. Elizabeth Van Lew ran a large spy ring in Richmond, and used her money and social position to great effect, hiding and then aiding the escape of Union prisoners of war, sometimes while a Confederate officer was boarding at her mansion. She was extremely cautious and meticulous, so that even though she was a well-known Abolitionist before the war, Union officials struggled to prove her guilty of any wrong doing. However, much less is said about Mary Jane Bowser, the fifth woman in this book, one who was crucial to Van Lew’s success. Bowser was a former slave, freed and educated by the Van Lew family. Early in the war, Van Lew helped place her inside the Confederate White House, where she posed as an illiterate servant. In fact, Bowser had an eidetic memory, and as she performed her work, she listened to conversations, and memorized the contents of papers belonging to Jefferson Davis, the Confederate president. She passed this information back to Van Lew through an intermediary, and Van Lew in turn encoded it and sent it across the lines, aiding important Union military victories, including the eventual fall of Richmond. Although Van Lew did much work for the Union that was not dependent on Bowser’s intelligence, Bowser deserves to be much more than a background character in this narrative; she is the hero of her own story.

Abbott tells her tale chronologically, switching amongst the four perspectives as needed. Though Belle Boyd and Rose Greenhow met briefly in Richmond in 1862, for the most part the four women occupy their own spheres with little overlap. Abbott puts narrative tension above strict chronology, leaving off each character at a crucial moment, and jumping to another figure. This means that the key revelations are front loaded into each new chapter, so that the book is difficult to put down. Abbott thoroughly succeeded in capturing my attention and piquing my curiosity about several other aspects of the American Civil War, a topic that has never been of any great interest to me previously. By the time I reached the epilogue, I very much wanted happy ending for all of these women, even where that was evidently not possible.