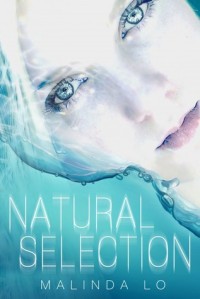 “A lot of Imrians get freaked out about the idea of being isolated within their own consciousness because they’re so accustomed to knowing, always, how others feel about them. I’m not worried about it, since I’ve lived on Earth. Humans never know for sure how others feel.”

In Adaptation, Amber Gray is a mysterious character whose arrival in Reese Holloway’s life is a source of confusion and ultimately betrayal. We know very little about her past, or her motivations, and her people, the Imrians, remain largely mysterious. Natural Selection is a novella that fills the gaps in the universe created in Adaptation and its sequel, Inheritance, and offers the reader a window into Amber’s past, and a glimpse at Imrian culture and customs.

Set several years before Adaptation, Natural Selection tells, in alternating chapters, two stories from Amber’s youth. The first is set on Earth, where an end-of-year camping trip results in a classmate outing Amber, and exposing her crush on her best friend, Morgan. The second takes place on the Imrian planet of Kurra when Amber is fifteen. She was born, and has lived two thirds of her life on Earth, but has returned to Kurra for a coming-of-age rite known as kibila’sa. Both stories examine how Amber’s divided life has made her feel simultaneously at home and alien on both worlds. The existence of aliens is part of the big reveal in Adaptation, and keeping it hidden for most of the book didn’t leave a lot of room for Malinda Lo to build or develop her alien culture. Natural Selection not only introduces us to Kurra, but examines the significance of the Imrian’s touch-based empathy, known as susum’urda, the ability which Reese acquired in the adaptation chamber.

In addition to expanding on the diversity of the world that Lo imagined in Adaptation, Natural Selection opens up interesting possibilities for the resolution of the love triangle that is forming between Reese, Amber, and David. Amber has a mother (Ama) and two fathers (Ada and Aba). A bisexual love triangle is already unusual, but the Imrian culture also offers Lo the possibility of further subverting the traditional YA love triangle through a polyamorous relationship. Neither Amber nor David is really a fully developed love interest in Adaptation, but I was leaning towards liking David better primarily because he had never betrayed Reese. While it is not strictly necessary to read Natural Selection before Inheritance, the novella makes Amber a more relatable character than she was before, and a more viable love interest for that sequel.

One thought on “Natural Selection (Adaptation #1.5)”