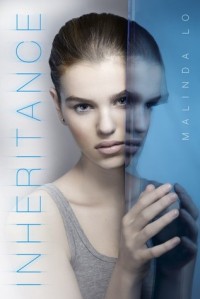 “I wanted to be an ordinary human girl who met another girl, and we liked each other and that was it. No complicated backstory to mess it all up.”

In Adaptation, Reese Holloway and her debate partner, David Li, crashed into the middle of a government conspiracy in a car accident that almost claimed their lives. Thanks to the alien medical technology, and the aliens, that the American government has been concealing for more than fifty years, they are both alive, but struggling to cope with the new powers that came with the Imrian DNA that saved their lives. Public interest in the Imrians is at a fever pitch, and Reese and David are caught at the centre of that maelstrom as a UN summit to treat with the alien visitors approaches.

Inheritance picks up right where Adaptation left off, with Reese and David stepping out of her mother’s house to address the press and finally reveal the truth about what happened to them in Area 51. But as soon as they are in front of the cameras, it becomes clear that there will be nothing simple about telling the truth. The government is prepared to interfere at every turn, and it remains to be seen if the Imrians can really be trusted. With public disclosure comes alien supporters, alien protesters, abductees who claim the Imrians are the aliens responsible for their kidnapping, and many more complications than they could possibly have foreseen. Inheritance is less action-oriented than Adaptation, and much more driven by political agendas and interpersonal relationships.

Young Adult fiction has an overwhelming tendency to write out parents, giving the teen protagonists broad freedom to pursue their adventures. But both Reese and David’s parents are present and involved, even though Reese’s parents are divorced, and her father has had to leave his job in Seattle to come help them deal with the situation. While writing out the parents makes logistics easier, Malinda Lo incorporates them into the story in a way that feels realistic, as they struggle to protect their children from powerful forces they couldn’t have imaged only months before. At the same time, Reese and David are still the ones caught at the centre of the conflict, and they still have to make difficult decisions about where their loyalties lie and who to trust. It is a fine balance, but Lo handles it masterfully.

Similarly well-handled are questions about gender and sexuality, which Lo addresses forthrightly. Trying to understand an alien culture and how it deals with these topics allows Lo to include these important discussions. Faced with a sudden onslaught of press attention, Reese actively decides to conceal her previous relationship with Amber, knowing the sensation it would cause. But this decision causes unexpected complications in her friendship with Julian, who can only see that she is going back into the closet. At the same time, the practice of susum’urda—the touch-based empathy that defines Imrian social interactions—is giving rise to an intense new relationship with David, even while Reese struggles to come to terms with Amber’s betrayal. However, for those to whom the concepts Lo is introducing are new and unfamiliar, the ending may seem implausible or rushed, even though the groundwork was clearly laid in Natural Selection. These books are best read in order, including the novella that fits between them.