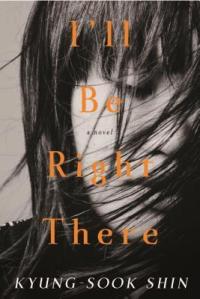 “You should only ask someone if they love you if you love them, regardless of what their answer might be.”

When Jung Yoon’s phone rings, she is not expecting a call from the ex-boyfriend who she has not spoken to in eight years. But as soon as she hears Yi Myungsuh’s voice at the other end of the line, she is catapulted back in time to her university days, when she enjoyed an especially close friendship with Myungsuh, and his childhood companion Miru. Myungsuh is calling with the news that Professor Yoon, the teacher who brought the three of them together at school, is dying. As Jung Yoon tries to muster up the courage to go visit her dying mentor, she reflects on the relationship she shared with Myungsuh and Miru during the unsettled days of South Korea’s political revolution.

I’ll Be Right There is composed of snippets of the present, but largely occurs in the past, drawing from Jung Yoon’s memories, and extracts from Myungsuh’s journal. Towards the end of the book, Kyung-sook Shin also includes some letters written to Jung Yoon by her childhood friend Dahn, while he is away completing his compulsory military service. Although each section is well-written in its own right, this makes for a flighty and extremely scattered narrative lacking in rhythm or flow.

Kyung-sook Shin sets her story amidst the political unrest of 1980s South Kora, when Park Chung-hee was overthrown, and Chun Doo-hwan took his place, but she deliberately does not delve into the context, focusing on the personal instead. She reveals in the author’s note that this was a conscious choice, because “Everything that happens in this novel could happen in any country and in any generation.” Shin seems to have feared getting bogged down in specifics, however, I found that going outside the book and reading about the history helped me get a better feel for the characters and the situation they were living in at the time. Well it is certainly possible to give too much exposition, Shin goes to the opposite extreme, robbing her story of its full impact.