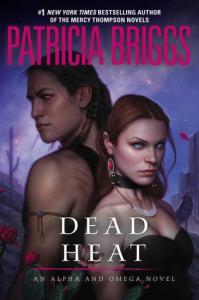 “But that is the dual gift of love, isn’t it? The joy of greeting and the sorrow of good-bye.”

Charles and Anna travel to an Arizona ranch to visit Joseph Sani, an old friend from Charles’ past, and buy Anna a horse for her birthday. However, the leisure trip turns into work when a Fae targets the Sani family, and begins replacing local children with simulacra to hide their kidnappings. The journey also proves to be an emotional one for Charles, who must face the fact that his old friend has become an old man, but is still steadfastly refusing the Change.

I got off on the wrong foot with this book, because it opens with Charles and Anna having a disagreement about possible ways to work around the fact that werewolves can’t have children. Reproductive angst doesn’t generally work for me as a plot device, but Patricia Briggs manages to bring it off fairly well by tying it into the larger themes of the book, including family, life, and death. The fact that the Fae they are tracking is targeting children ties their disagreement into the mystery, and Anna’s desire for a child is book-ended by Charles struggling to come to terms with Joseph’s mortality. Overall, it has a nice symmetry, even though it isn’t my favourite plot point.

Briggs also dedicates a significant amount of time to horses and horsemanship. In addition to Anna’s search for a horse, the Sanis are horse breeders, and are preparing for a big show when Charles and Anna visit. Dead Heat includes lots of details about horses, breeding, and showmanship, much of which does little to drive the story forward, though Brigg’s unbridled passion for her subject is clear. Your mileage this aspect of the book will vary according to your interest in horses.

Though I didn’t particularly enjoy two major aspects of this book, Dead Heat has a solid central mystery and important character development. We get a glimpse into Charles’ past, which he rarely talks about, and this helps Anna understand where his staunch opposition to trying to have children comes from. The Fae situation, which has been a bit of a cold war in Briggs recent books, is also starting to heat up, and looks set to be a significant issue in both the Mercy Thompson and Alpha & Omega series going forward. The next Mercy Thompson book, Fire Touched, is due out in March 2016.