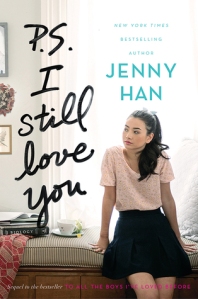 “You haven’t brought me down. Just the opposite. You’ve brought me out. You gave me my first love story, Peter. Please just don’t let it be over yet.”

Lara Jean Song Covey didn’t mean to fall for Peter Kavinsky for real when they were pretending to date, but she did. Now they are trying to go out for real, but Lara Jean is still bothered by Peter’s friendship with his ex-girlfriend, and her ex-best friend, Genevieve. Lara Jean and Peter’s relationship also becomes uncomfortably public when someone posts a video of them kissing in the hot tub on the school ski trip on an anonymous Instagram account. Then Lara Jean’s last missing love letter comes back to her, and she finds herself half-in-love with her middle school crush, John Ambrose McLaren, all over again. But is she really falling for John, or is she just afraid of what she feels for Peter?

With Lara Jean’s awkward former crush on her sister’s ex-boyfriend Josh mostly out of the picture after the events of To All the Boys I’ve Loved Before, P.S. I Still Love You ties up the loose end of Lara Jean’s last love letter by placing her in the middle of another love triangle between Peter Kavinsky and John Ambrose McLaren. John is a late comer to the field and seems unlikely to be able to win Lara Jean given his tardy arrival to the story arc. However, he is also a great deal more likeable than either Peter or Josh, whose rival antics in To All the Boys I’ve Loved Before kind of turned me off of both love interests. The publisher’s description would lead you to believe that this sequel is finally about Lara Jean and Peter having a real relationship, but John’s appearance complicates that more than just figuring out how to be with someone, and his late arrival makes the ending feel rushed and premature.

Lara Jean’s relationships with her sisters Kitty and Margot continued to be relatively important to the story, which was a standout feature of To All the Boys I’ve Loved Before. Kitty is still her hilarious, rambunctious self, while Margot remains steady and thoughtful, but P.S. I Still Love You was more about friendships than sisterhood. Recalling the existence of a time capsule buried beneath a neighbour’s treehouse forces Lara Jean to revisit her middle school friendships, and contemplate how she and Genevieve fell out, and their current rivalry over Peter’s time and attention. She grapples with jealousy, and the fact that Peter refuses to believe Genevieve was responsible for the video. Though Peter remained personally unappealing, Han uses their relationship to tackle bullying, sexual double standards, and friendship well enough to make this sequel worthwhile.