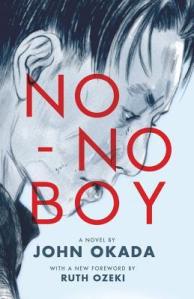 “Did she mean to sit there and imply that the four intervening years were to be casually forgotten and life resumed as if there had been no four years and no war and no Eto who spit on him because of the thing he had done?”

The son of Japanese immigrants to Seattle, Ichiro Yamada finds himself in an impossible position when the attack on Pearl Harbor brings the United States into World War II. Although America is the only home he has ever known, Ichiro’s mother is fiercely loyal to Japan, and her expectations, combined with the discrimination and forced internment of Japanese-Americans propelled Ichiro to answer “no” twice in the crucial loyalty questionnaire administered by the government. After two years in an internment camp, and two more years in prison for refusing to serve in the army, the war has ended, and Ichiro returns home to a Japanese-American community divided between those whose sons served, and those who, for various reasons, refused.

Originally published in 1956 with little fanfare, John Okada’s only novel was rediscovered in the 1970s by young Japanese-Americans who were dismayed by the fact that so few of their elders had fought back against the internment, or sough justice for it afterwards. Recently reissued by the University of Washington Press, No-No Boy is now considered a classic of Japanese-American literature. The new edition includes a noteworthy introduction by novelist Ruth Ozeki, which takes the form of a letter to the author. In this letter, Ozeki addresses the significance of No-No Boy to the Japanese-American community, and the unfairness of the fact that Okada did not live long enough to witness the transformation from failure to acclaim. Ozeki credits No-No Boy as the first book that made her feel the history she already knew, and that her family had lived.

No-No Boy is celebrated as a novel of resistance, and so I expected Ichiro to be unrepentant and self-righteous. However, Okada has a created a character who is more complex than that. Neither repentant or nor unrepentant, Ichiro is conflicted. He cannot help but perceive the injustice done to his community by the American government, and this knowledge complicates his reflections on whether his life might have been better if he had just said yes. Unable to summon righteous anger because he is plagued by doubt, Ichiro’s anger is a slow, festering thing that is eating away at him as surely as Kenji’s leg is being eaten away. Although Ichiro dares to hope that his community, and even America itself, will one day forgive him for what he did, he doesn’t believe he will ever be able to fix the things the decision broke inside of him.

If Ichiro and his troubled friend Freddie represent the risks of saying no, then Kenji and Bill represent the price of saying yes. Bill Kumasaka never came home from the war, but worse still is the fate of Ichiro’s new friend, Kenji Kanno, who lost a leg. Losing a leg is survivable, but Kenji’s amputation refuses to heal, and every visit to the VA hospital costs him a few more inches as his body slowly rots. Even as he watches his friend wasting away, Ichiro wonders if it might be better to be a dying veteran than a living no-no boy with no life—no education, no job, and no future. Kenji himself is a compelling character, not because he said yes, or is certain that he made the right choice, but because he is at peace with his decision.

Beyond the no-no boys and veterans, the turmoil within the Japanese-American community is further reflected in Ichiro’s family. Mrs. Yamada is fiercely proud of her son’s refusal to serve, choosing to interpret it as loyalty to Japan rather than a protest against America. She likewise refuses to believe that Japan has lost the war, asserting instead that any such news is American government propaganda. She waits for the Japanese ships she believes are coming to take the loyal home, and nothing her husband can say will persuade her otherwise. Meanwhile, Ichiro’s seventeen-year-old brother Taro is disgusted by the disgrace Ichiro has brought on their family, and is counting down the days until his eighteenth birthday, when he can enlist in the American army. Together they show the broad spectrum of possible reactions to the internment experience.

Published only a dozen years after the war, scholars have speculated that Americans simply weren’t ready for Okada’s subversive account of the unconstitutional imprisonment of American citizens. And Okada’s prose, which is solid but often uninspired, makes it easy to understand how this now-seminal novel sank from view so quickly. Okada is prone to run-on sentences breathless with rage and despair, and his narration shifts from “he” to “one” to “I” with little demarcation. However, the emotion and insight Okada brings to the Japanese interment is unparalleled, even if his prose is not. With the distance of time, the social and historical significance of No-No Boy are free to rise above the sometimes heavy-handed writing of an emerging novelist.