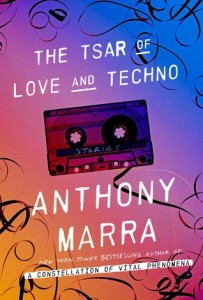 Disclaimer: I received a free review copy of this book at ALA Annual 2015. All quotes are based on an uncorrected text.

“That morning, the last images of Vaska’s face had been scratched into oblivion with a one ruble coin. That afternoon, I began to paint him into everything.”

From Grozny in the south, through St. Petersburg, and on to Kirovsk in the high Arctic, a painting of a field—a minor work by a Chechen master—connects a Soviet-era censor to a blind art historian, and a Russian oligarch to the granddaughter of a disgraced prima ballerina. A Russian soldier is killed in the field the painting depicts, and his former lover sets out for war-torn Grozny, determined to purchase the piece. In a series of nine interlinked short stories, three of which have been previously published, Anthony Marra depicts the many compromises and disappointments of ordinary Russians as they struggle under Communism, and then continue to struggle once they have thrown it off.

Beginning in Leningrad in 1937, a censor who once dreamed of being an artist is charged with expunging enemies of the state from official photographs and paintings. He is even required to insert the image of a party boss into a painting, defacing the work of a Chechen master. Unbeknownst to his superiors, for every person he disappears, he paints the brother he betrayed somewhere into the background of the photo. It seems as if he will get away with this small act of defiance indefinitely, until he becomes fascinated by the photo of a disgraced ballerina. Decades later and a thousand kilometres away, Kolya returns home from the war in Chechnya to the Siberian mining town of Kirovsk, only to discover that his high school girlfriend has married the thirteenth richest man in Russia, and become a beauty queen and movie star. In Grozny, an art historian blinded by the explosion that destroyed the museum where she worked despairs of ever finishing her dissertation on the censor who painted a mysterious man into all of his works because she cannot afford the surgery necessary to restore her sight.

Anthony Marra takes these many disparate events, and weaves them together into a portrait of the hushed acts of complicity and rebellion that are necessary to negotiate life in Russia. In addition to the pleasure of Marra’s beautifully rendered prose, there is the anticipation of finding the connection between the assorted tales. Just when it seems like there is no link to the previous stories, Marra sweeps in and ties it all together. He even manages to slip in the occasional, passing reference to familiar figures from A Constellation of Vital Phenomena, his striking 2013 debut novel, which won numerous fiction awards. The Tsar of Love and Techno has the same heart-breaking melancholy and absurd dark humour here that was present in his phenomenal novel, and his powers of description are strongly in evidence. Particularly exceptional is the second story, “Granddaughters,” which uses the collective voice to share the disappointments of six women who live ordinary lives in Kirovsk while they watch one of their classmates rise to fame and fortune.

As a novel, these events would be loose, somewhat shapeless, and stylistically uneven. As short stories, they are deeply interconnected, and reflect the variety of experience in a country with a turbulent history. The connections feel natural rather than forced, and the collective result is greater than the sum of its parts.

One thought on “The Tsar of Love and Techno”