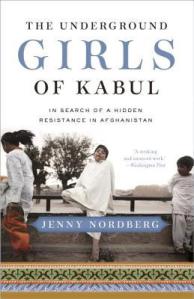 “Although none of the girls chose their boyhood voluntarily, most say they enjoy their borrowed status. It all depends on what they get to do with it. For each child, it boils down to perks versus burdens.”

Between 2009 and 2011, Swedish news correspondent Jenny Nordberg was in Afghanistan, covering a female politician in the country’s new democratically elected parliament. Azita was representing a poor province far from the capital, and she lacked the money and connections of many of her fellow parliamentarians. But what quickly caught Nordberg’s attention was an open secret within Azita’s family. Her youngest child, Mehran, who dressed like a boy, had been born a girl named Manoush. As Nordberg cautiously probed this situation, she quickly realized that Mehran was not a transgender child as we might see in the West, but a substitute son in a family with only daughters. Mehran had not asked to become a boy; her parents had proposed the practice to her in order to elevate their status in a culture that values sons. Nordberg could find no written or scholarly mention of this practice, nor could she get officials or scholars to acknowledge it. Yet she began to suspect that Mehran was not an isolated case, but rather a single instance of an underground cultural practice. Through a chain of referrals, and with the help of a diplomatic translator, Nordberg makes contact with a series of girls who are living as boys, women who spent part of their childhood as boys, and women who have refused to give up the freedoms they enjoy as bacha posh.

What is most remarkable about bacha posh is how uncontroversial it seems to be among Afghans, provided that the children return to living as girls before puberty. Though Mehran’s birth gender is known at her school, everyone quietly accepts her as a boy in day-to-day life, and even the teachers regard it as her parent’s business, and none of theirs. Another girl encounters a policeman who accepts her word as a man that another boy was harassing her sister on the street. Only one bacha posh Nordberg meets recounts having her disguise rejected at school when she was very young. However, older girls begin to face intense pressure and even harassment to return to their proper gender roles. And within Azita’s family, there is also some pressure and harassment from Mehran’s second mother, her father’s first wife, and the mother of another daughter. Though Mehran is only six when Nordberg meets her, the first wife is already pressuring her to return to being a girl, because her status as a son elevates Azita, the second wife, above her as the only wife to produce a male heir, however fictional.

Naturally, from a Western perspective, however, Nordberg is concerned about the psychological welfare of girls who live for a time as boys, and then are forced to change back in order to become wives and mothers. In this respect, Underground Girls of Kabul is about not only the gender divide that exists in Afghanistan, but the cultural divide that exists between the native Afghan people, and the foreign reporters, soldiers, and aid workers that flooded into their country, bent on transforming it without ever really understanding it. While an Afghan doctor Nordberg meets acknowledges that bacha posh who do not revert before puberty can get “a little funny in the head,” the will of the parents predominates. Sometimes, though they had the will to make a son, they do not have the will to force their daughters to change back once they have come to enjoy the privileges and freedoms of bacha posh. After a time, Nordberg begins to be able to recognize the frank gazes of Afghan women who spent some time as bacha posh. Her general observation is that “any potential empowering effects of living on the other side seem to be preserved in an adult woman only if her time as a boy was brief, and ended before puberty. After that…it quickly becomes more complicated.” But by reminding us of acts of gender-swapping within our own history, and contemporary Western practices that segregate our culture by gender, Nordberg highlights the fact that has not been so long since our own gender revolution.

Nordberg identifies three main reasons for making a bacha posh, two of which are indicative of sharp social stratification; in poor families, the primary reason for creating a bacha posh is to enable the child to go work, something that is acceptable for sons but not daughters. In wealthier families, it is often more of a question of social status. Having a son improves a family’s standing, and outward appearance of strength, even if that son no more than a publically accepted fiction. However, Nordberg also uncovers a deeply rooted belief in a certain magic attached the practice of bacha posh. Distinctly magical, and decidedly un-Islamic, there is an old belief that the presence of a bacha posh within a family will aid the conception of a real son. This belief may also be part of the reason that bacha posh is quietly accepted but rarely spoken of; Nordberg finds that the practice has its roots in ancient Zoroastrian beliefs, something that cannot be openly acknowledged in strictly Muslim Afghanistan.

The Underground Girls of Kabul documents a complicated practice that is at once an act of resistance against the socially enforced gender order, and a concession to sexist ideas about what behaviours and activities are appropriate only for boys. Nordberg comes to view bacha posh as both a symptom of Afghanistan’s patriarchy, and an avenue through which young women can resist it, potentially at great cost to themselves and their mental health. However, as Nordberg also makes clear, the cost of being a woman in Afghanistan in any form is punishing, and only exacerbated in times of war and conflict.

The Bookseller of Kabul by Asne Seierstad

One thought on “The Underground Girls of Kabul”