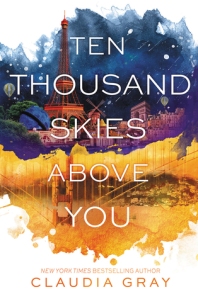 “The first time I traveled to another dimension, I intended to take a life. Now I’m trying to save one. But I can’t do that unless I save myself.”

In A Thousand Pieces of You, Marguerite Caine set out to kill Paul Markov, believing him to be responsible for the murder of her father, and the theft of the Firebird device that enables the projection of consciousness into alternate universes. But Paul proved innocent, and now Marguerite must save him from the machinations of Wyatt Conley and the Triad Corporation. In yet another effort to force Marguerite into his employ, Conley has fragmented Paul’s soul, and cast the remnants into four different dimensions. In order to retrieve them, Marguerite will have to do Conley’s dirty work, sabotaging her parents’ research in universes otherwise beyond his reach. With Theo’s help, Marguerite tries to figure out how to retrieve each remnant without betraying her parents or incurring Conley’s wrath. But the dark and violent realities she must visit to fulfill her mission cause her to doubt herself and everyone she loves.

Much of the first volume of this series focused on alternate realities, exploring the many different possible worlds that exist parallel to Marguerite’s home dimension as she chases after a suspected killer. By contrast, Ten Thousand Skies Above You is more focused on alternate personalities, and how the people she knows and loves might have been different in another world. Marguerite must realize that that no one—not Paul, not Theo, and not her—is perfect. There is always a life in which they would or could do terrible things, just as there are worlds in which Wyatt Conley’s ambitions have not destroyed his humanity.

When it comes to love triangles and alternate dimensions, you can have your cake and eat it, too—at least for a little while. Gray starts immediately from the action after Paul has been taken and fragmented by Conley, but flashbacks allow us to see the brief interlude Paul and Marguerite were able to spend together between the events of A Thousand Pieces of You and Ten Thousand Skies Above You. However, for those who are pulling for Theo, one of Marguerites biggest moments of doubt comes when she stumbles into a universe where her other self has chosen Theo over Paul.

Although the focus is on people, we still get to visit multiple versions of Marguerite’s world, one delightful—or delightfully terrifying—permutation after another. Her first stop is a war-ravaged California, where all science is bent towards military means. Yet another jump takes her to New York, into a world where Paul never slipped the clutches of the father he never speaks about. The worlds remain intriguing, even as they are designed to cast light on the characters. Gray also never gets too down and nitty gritty about the science of the Firebird, but she does manage to make mathematics and physics both beautiful and romantic, while never belittling the significance of art.

The first half of the book is full of action and romance, with little of the attention to the ethical dilemma of interdimensional travel that involves overtaking the lives of alternate selves that was present in the first volume. But just as I felt that Gray had let a critical aspect of the story slip through her fingers, she drives the seriousness of such meddling home with a ruthlessness that left me breathless when Marguerite briefly returns to the Russiaverse—the world in which she is the Grand Duchess Margarita. Yet another world hints at a reality in which Marguerite’s parents have realized the dire ethical implications of their work, and set out along another path. Taken together, they offer intriguing possibilities for the third volume, and Gray finishes with a twist will leave you dying to read it sooner rather than later.

3 thoughts on “Ten Thousand Skies Above You (Firebird #2)”