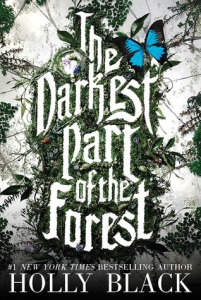 “Tourists, the locals would say, a sneer in their voices. And they still did. Because everyone believed—everyone had to believe—that tourists did stupid things that got them killed. And if someone from Fairfold very occasionally went missing, too, well they must have been acting like a tourist. They should have known better. The people of Fairfold came to think of the Folk as inevitable, a natural hazard like hailstorms or getting swept out to sea by a riptide. It was a strange kind of double consciousness.”

For as long as the people of Fairfold can remember, the horned boy has slept in a glass coffin, deep in the woods. Nothing anyone says or does can wake him, though bad things are known to happen to those who deface his resting place. As children, siblings Hazel and Ben played around the coffin, making up stories about the prince who lay sleeping inside of it, both half in love with him. Neither ever dreamed for a moment that he could hear them, or that he would ever wake up. The humans of Fairfold, and the Fae who live in the woods around their town have long had an accord, but the strange things that have always happened in Fairfold have begun to be stranger, and more dangerous. Then one morning, the horned boy is gone from his coffin, and the long peace between human and Fae is shattered in an instant. Old promises and debts are called in, stoking simmering feuds and ancient resentments to life. Hazel is recalled to childhood dreams of knighthood, slaying monsters and protecting the weak, while Ben must grapple with the faerie boon his mother accidentally won for him, which has proved as much a curse as a gift. And Jack, the changeling who lives among the people of Fairfold, and Ben’s best friend, finds himself caught between his human life and his Fae heritage.

The Darkest Part of the Forest is an eerie fairy tale that builds on recognizable elements of traditional lore while also incorporating a contemporary setting and modern concerns. Black also has her own unique twists, such as a human woman who demanded the return of her child from the Fae, and then had the temerity to keep the fairy child as well, raising them as twins. Fairfold is, on the surface, a seemingly normal American town with a quaint New England feel, but as the story progresses, its more unusual aspects become ever more prominent. The town has a seductive mythos and a well-developed mood that sends a shiver down the spine.

The Darkest Part of the Forest benefits from a deep back-story, the flash-backs to which only occasionally cause the pacing to lag (indeed the acknowledgements hint that Black struggled with how to make this complex plotting work). Layers of supressed memories and half-forgotten promises litter Ben and Hazel’s less-than-idyllic childhood, and their habit of keeping secrets and trying to protect one another serves them ill when they most need to be a team. Things that have long gone unspoken between them begin tumbling out into the open at inopportune moments, forcing them to reckon with what has driven them apart. Their complex relationship is one of the strongest aspects of the story.

Thematically, Black examines dreams and the bargains we make to achieve them, and the ills we are willing to overlook in the trade. The people of Fairfold have long tried to pretend that their unusual home is normal, and that they are safe if they just obey the rules. But in many ways they are not safe so much as they are habituated to the danger, and they rationalize their own safety by finding fault with the victims that are taken in their stead. The awakening of the horned boy forces them to reckon, however reluctantly, with the drawbacks inherent in the bargain they have made by living in a magical place. For Hazel and Ben, their fictional prince from stories spun in childhood becomes overlaid with the all too real and possibly dangerous supernatural being that awakens from his resting place.

As with Black’s previous book, The Coldest Girl in Coldtown, The Darkest Part of the Forest stands strongly alone, a well-developed fantasy in a sea of series.

7 thoughts on “The Darkest Part of the Forest”