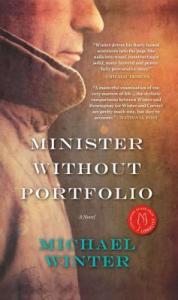 “It astounded him and made him feel guilty, That he was enjoying her. He was supposed to be bearing a cross, but this was an ambush of joy.”

As a civilian contractor, Henry should never have been in the patrol vehicle that was blown up on the side of the road in Afghanistan, taking his friend Patrick Morris with it. Nevertheless, he feels responsible for Morris’ death, and unable to outrun the guilt even once he returns to Canada and takes job in Alberta’s oil fields. So he goes home to Newfoundland, where he must come face to face with all the people who knew Patrick Morris, and especially his long-time girlfriend, Martha. Martha has inherited the rundown, century-old house that once belonged to Morris’ aunt, and in an effort to make amends, Henry sets out to fix it for her. But the house has a complicated history, and Martha is keeping a secret of her own.

Michael Winter has a rough, abbreviated style that has been compared to Cormac McCarthy, making it somewhat difficult to settle down into the story. Winter eschews quotation and question marks, and tends towards short sentences. The characters feel distant and unknowable, despite the fact that we are inside Henry’s head, but it is Martha who feels the most insubstantial. Henry is so wrapped up inside what he should do, and what he is responsible for, that he has little space to grant Martha any of her own agency in the matter. It doesn’t take much to guess Martha’s secret, and we know little else about her besides the fact that she is a physical therapist. She seems to exist largely as a nexus for Henry’s guilt and self-recrimination.

What does work well here is the setting, which comes much more alive than any of the characters. Newfoundland’s seaside character is omnipresent, and the picture of small-town life is vividly realized. The neighbours help one another out, but also gossip incessantly, and Martha and Henry find themselves at the centre of speculation. At the same time, they engage in speculation about their neighbour Colleen, who everyone suspects is having an affair with the American who has a summer home nearby. Neighbourly helpfulness comes with an equal measure of nosiness, and the community’s complicated history repeatedly interferes with their project.

This year’s Canada Reads theme is “starting over,” and in Minister Without Portfolio, the house becomes a metaphor for Henry’s effort to start over. In fact, all of the events of Henry’s story have been about starting over. He signed up to go to Afghanistan in order to get away from, and thereby get over, a woman who broke his heart. He tries to begin yet again with a job in Alberta, only to find himself in the middle of another workplace tragedy. The house is really his third chance, and we must read and see if the third time is indeed the charm, or if Henry is simply destined for tragedy, unable to redeem himself.

Minister Without Portfolio was defended in this year’s Canada Reads debates by actor and former WWE wrestler Adam “Edge” Copeland. Copeland championed this title as a book about forgiving ourselves in order to grow. In his opening arguments, he beautifully characterized it as “an exercise in keeping the wolves of the mind at bay.” However, both Farah Mohamed and Clara Hughes singled it out in the debate as the book that least embodied the theme of starting over. Mohamed made the point that Henry doesn’t seem to be starting over so much as borrowing someone else’s life, while Hughes simply felt that the theme was less overt in Minister Without Portfolio than the other titles. Copeland defended it on the grounds that while it starts out as someone else’s story, it transforms into love. Vinay Virmani also argued that the book lost steam in the second half, shifting away from Henry’s character and focusing on the house, leading him to realize how little we know or understand about the main character. In the end, both Mohamed and Virmani voted against Minister Without Portfolio. A surprise tie with The Hero’s Walk left Clara Hughes casting the deciding vote between the two. Hughes framed it not as voting off Minister Without Portfolio, but keeping The Hero’s Walk. 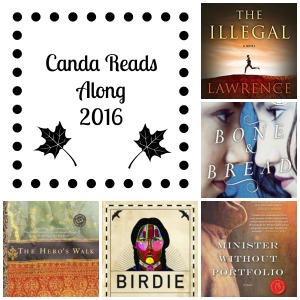 Check out the many ways to watch or listen to the Canada Reads debates on CBC!

2 thoughts on “Canada Reads Along 2016: Minister Without Portfolio”