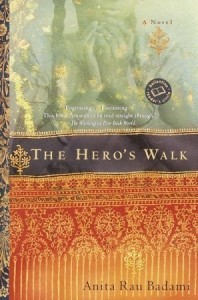 “Ghosts frightened him now. He had become more aware than ever that the world was full of unseen things, old memories and thoughts, longings and nightmares, anger, regret, madness. They floated turbulently around, an accumulation of whispering yesterdays that grew and grew and grew.”

Sripathi Rao and his family live in the once-grand Big House, on Brahmin Street in the seaside Indian town of Toturpuram. His mother Ammayya, his wife Nirmala, and his unmarried sister Putti all reside under his roof, along with his unemployed adult son, Arun. Absent, but never spoken of, is his daughter, Maya, who went away to school in North America, and then defied her family by breaking off her traditional engagement to marry a white man. It has been nine years since Maya’s exile, but still her father stubbornly refuses to take her calls or allow her to visit. But everything changes when a phone call from Canada brings the news that Maya and her husband are dead, leaving their daughter Nandana orphaned. With no other family in Canada to care for her, Sripathi must fly to Vancouver and bring her home to Toturpuram, unaware of how much one small girl, stricken mute by grief, will disrupt the status quo at Big House.

Apart from the initial upset, the events of The Hero’s Walk are mostly quiet and subtle, though the environs are lively and colourful. The tension comes from the interactions of a cast of idiosyncratic and richly drawn characters who inhabit Big House. Sripathi is unhappily, and somewhat precariously, employed at an advertising agency now largely staffed by younger and more credentialed staff. But his responsibility for his family, and his son’s refusal to give up his social activism in favour of a paying job, forces him to continue. He finds satisfaction and self-worth in his secret, second life, writing pithy and impassioned letters to the editor under the pen name Pro Bono Publica.

No less well drawn are the various women of Sripathi’s family. His mother, Ammayya is a bitter, miserly old woman. She has been torn apart between maintaining the dignity of her role as the widow of a wealthy Brahmin lawyer, and the very public knowledge that he died deeply in debt because he was keeping a mistress. Her unwillingness to let go of anything once she has it is most evident in her relationship with her daughter, Putti, who is still unmarried at the age of forty-two. Largely an obedient daughter, Putti has begun to chafe at her mother’s unwillingness to accept any of the suitors the matchmaker brings them. Sripathi’s wife, Nirmala, has long been the patient peacekeeper of the household, but her daughter’s death seems to have broken something in her, and she refuses to be passive any longer. It is a fascinating and complicated family dynamic.

Nandana lands in the middle of all this, still not quite comprehending that her parents are truly dead and gone. She has not spoken since their deaths. In her, Sripathi sees a second chance to do right by his granddaughter where he failed her mother. But he must also come to see her as her own unique person, quite different from his memory of her mother as a child. This complicated cast of characters must readjust their lives to accommodate the new arrival. And the passing of the grudge against Maya with her death will cause Sripathi, and indeed all the Raos, to re-examine their prejudices and preconceptions. One great tragedy leads to many new beginnings.

This week on Canada Reads, The Hero’s Walk has been eloquently and passionately defended by actor and filmmaker Vinay Virmani, who also announced that he has optioned the film rights from author Anita Rau Badami. The final day of debate asked the panelists to delve into what they loved about each book, where they found courage in them, and touched back on the theme of “starting over.” They were also asked to identify the book that, if read by all Canadians, would help get us to the kind of country they hope to live in. A key point of Virmani’s defence against The Illegal was that we cannot overcome our fears and welcome refugees until we challenge prejudices inside our own homes. The writing in The Hero’s Walk received unguarded praise from many of the panelists, but when asked to identify a powerful moments and instances of courage, most of the panelists spoke to The Illegal by Lawrence Hill. With each of the two remaining defenders voting against their opponent, it was down to the three free agents to crown the winner. After her own book was eliminated on day two, Farah Mohamed seemed to cast herself behind The Hero’s Walk, and she held to that today, voting to eliminate The Illegal alongside Vinay Virmani. Along with Clara Hughes, Bruce Poon Tip cast his vote against The Hero’s Walk, as he did on day three. This left the deciding vote in the hands of a very torn Adam Copeland, who in today’s debate admitted that Virmani’s defence had helped him see more layers and depth in The Hero’s Walk than during his initial reading. Earlier in the week, he said he could picture The Illegal as a 1990s Will Smith action flick, a comment which he clarified today was not derogatory, but rather spoke to the intensity and pacing of The Illegal. Ultimately, he voted off The Hero’s Walk.

Check back tomorrow for my review of the winning title, The Illegal by Lawrence Hill.

It’s not too late to catch the reruns of the Canada Reads debates on CBC!