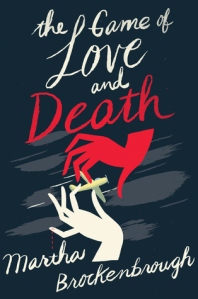 Two eternal opposing forces have faced off thousands of times across the millennia, each choosing a player to represent them in the Game. From Antony and Cleopatra to Romeo and Juliet, Love and Death have fought through their proxies, and Death has always, always won. Yet they continue to play. In Depression-era Seattle, two new players are named; Flora Saudade and Henry Bishop. Flora is an African-American jazz singer who dreams of being the next Bessie Coleman or Amelia Earhart. Henry is the adopted son of a wealthy newspaper magnate, divided from Flora by race as well as class. Although they do not know that they are playing, let alone what is at stake, they must choose one another against all the odds in order to win the Game.

The Game of Love and Death is indeed, as you might expect, a love story. But it is also a story about history, inequality, and tragedy. Orphaned and dependent on his adoptive family for everything, forced to sacrifice his own dreams in order to please them, Henry doesn’t exactly think of himself as privileged. But spending time with Flora forces him to confront the fact that they cannot even go out to dinner together because no restaurant will serve a mixed race couple. He may be dependent on the good will of his adoptive family, but he still lives in a grand house, and has received a first rate education at a private school, with the promise of a college scholarship. Meanwhile, Flora’s family is being coerced by corrupt liquor inspection officials, who have the power to shut down their nightclub and destroy their livelihood. She cannot imagine how she will ever afford her dream of owning her own airplane.

Although not the main plot, the storyline of Henry’s adoptive brother Ethan is an intriguing thread running through the book. Ethan is destined to inherit the newspaper from his father, but Henry has long been helping him hide the fact that Ethan is nearly illiterate, struggling to read and write despite his innate intelligence. Henry has dreams beyond the paper, but leaving would mean abandoning Ethan. For his part, Henry is also unaware of the fact that Ethan is in love with him. Missing this crucial piece of information, he cannot see that his friend’s inability to accept himself prevents him from supporting Henry’s relationship with Flora, and their brotherly bond begins to crack.

Class conflict is evident not just in Henry and Flora’s relationship, but in Henry and Ethan’s unequal status within the family, and their work at the newspaper. Determined to sniff out a good story, Ethan’s father sends them to Hooverville, the shantytown that is home to the many men displaced and unemployed by the Great Depression. They are assigned to find out whether rumours about illegal alcohol brewing in the camp are true, forcing Ethan to decide whether he is willing to prey upon the livelihood of men who are already down and out. It would earn him his father’s approval, but it might cost him everything else.

Already divided by race and class, Henry and Flora’s star-crossed romance is further complicated by the machinations of Love and Death. When the Game begins in earnest, neither immortal is content to stand idly by. Though Love is forbidden to make either player fall for the other, and Death is forbidden to kill them, everything—and everyone—else is fair game. Flora has already lost her parents, but the Game may now cost her still more. Each immortal takes human form, insinuating themselves into the lives of the players, the better to manipulate them. Brockenbrough oversets expectations, embodying Love as a man, and Death as a woman as she transforms these immortal powers into comprehensible characters.

The Game of Love and Death is beautifully atmospheric, brought to life by Martha Brockenbrough’s exquisite writing. Marketed as Young Adult, likely due to the ages of the protagonists, it nevertheless has strong cross-over appeal. Shifting third person narration allows us to see into the minds of Love, Death, Henry, and Flora, and other minor players, as eternal themes play out on a new stage.

One thought on “The Game of Love and Death”