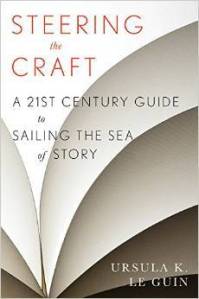 “If you don’t read widely, or read only writers in fashion at the moment, you’ll have a limited idea of what can be done with the English language.”

Steering the Craft is the updated edition of esteemed science fiction and fantasy writer Ursula K. Le Guin’s manual and workbook for storytellers. Subtitled “A 21st Century Guide to Sailing the Sea of Story,” she uses the metaphor of a ship and crew throughout the text. Originally published in 1998, this updated edition makes some effort to address modern changes, but also benefits from Le Guin’s additional fifteen years of experience teaching writing since the initial publication.

This book is intended as a manual for writers, but I picked up Steering the Craft from at display at my library as a fan of Le Guin’s work, curious to hear what she had to say about writing. Beyond its obvious purpose, it can raise consciousness in readers and reviewers alike, making you more aware of how the best writers work their magic, as well as better able to identify what has gone wrong when you aren’t enjoying a particular book. That said, the remainder of this review will address the book for what it is. Much of the text consists of exercises and examples, but there are also sections that are essentially opinion pieces about particular elements of style.

Steering the Craft is a short, focused, craft-driven book about specific writing techniques, from syntax and repetition to point of view and voice. Le Guin cautions “I want to say up front, it is not a book for beginners. It’s meant for people who have already worked hard at their writing.” More than a treatise on writing, it is “essentially a workbook,” incorporating activities suitable for either writing groups or what Le Guin calls “Lone Navigators,” extending the sailing metaphor of the title. In addition to exercises and specific information about techniques, she includes an appendix of advice for making writing groups function effectively.

Most of the advice in this volume is aimed at fiction writing, though Le Guin occasionally addresses how it can be adapted for narrative non-fiction or memoir. Some parts are perhaps more relevant to non-fiction than she gives them credit for; anyone can read their writing aloud to hear if it flows, and the tendency to overuse qualifiers is endemic in fiction and non-fiction alike. Most of the advice is not specific to genre writing, but writers of genre fiction can at least pick this manual up knowing that Le Guin will not be sneering at their subject matter. The chapters on Indirect Narration and Crowding and Leaping may be of particular interest, since they deal with how to subtly incorporate information into the text, which is key for world-building.

In addition to expounding on general principles, Le Guin is careful to illustrate her argument, Often her writing about a particular technique will be demonstrating the point she is trying to make. For example, when discussing repetition, she cautions that “prose can’t rhyme and chime and repeat a beat as poetry can, or if it does it had better be subtler about it than the first half of this sentence.” When cautioning against using qualifiers in writing the way you might use them in speech, she writes, “you might just kind of take a little look at your own writing to see if you might have some very favourite qualifiers that you kind of, like, use just a little too often.” After a theoretical discussion, sentences like that serve to make her point crystal clear. Each chapter also includes sample passages from other published works—mostly classics for copyright reasons—that demonstrate the technique under consideration.

Most of the exercises in this book are indeed very specific, and wouldn’t be suitable for getting a beginning writer moving and motivated, or in the habit of practicing and producing regularly. Her take on point of view gets well beyond pronouns, and really delves into perspectives, particularly dealing with how much information can be know and used depending on whether the narrator is limited, and if they are involved or distant. Le Guin does reiterate some common advice, but with her own memorable twists. For example, she gives the familiar adage “to break a rule you have to know the rule,” but then adds “a blunder is not a revolution.” Concise and practical, this volume would seem very worthwhile for writers looking to hone specific aspects of their craft.

One thought on “Steering the Craft”