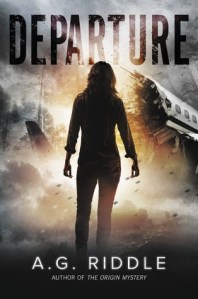 **This is a guest review by my brother Josh Shortt**

Disclaimer: A free review copy of this book was provided by Harper Voyager.

“People who love LOST will like it,” my sister explained as she handed me a copy of Departure. To my ears that sounded like a dare. A dare, as evidenced by the following review, I did not pass up.

The cover art of Departure makes it clear that the story commences in a similar fashion to LOST, with a plane crash in the countryside. The first part of the tale is interested in survival concerns such as assisting the injured, gathering food and supplies, and exploring the environment. As in LOST, the crash provides dual protagonists Nick Stone and Harper Lane a second chance at unsatisfactory lives. The story heads in its own direction in Part II, although many tropes also used in LOST remain in play.

Nick Stone is a natural leader who rises to the occasion to assist other survivors. Underneath this strong exterior is a desperate man who is worried about a potential business proposal. Should he seize the opportunity or pass it up and potentially miss out? Harper Lane is not a natural leader, but is brave in her own right. Harper finds herself torn between writing another biography (financial security) vs. writing her novel (following her dreams). While both choices are business dilemmas, they differ in that Harper’s motivation behind her choice is more clear, while Nick isn’t entirely sure why he is dissatisfied with his life. Harper knows what it is she must do, she is simply reluctant to go through with it.

A.G. Riddle never takes Harper beyond these two obvious choices. An unseen third option that Harper conjures up under pressure could have made her a more satisfying character. Of course, that would entirely change the story. At least Riddle tests Harper’s commitment to her decision and allows us to witness her agonizing over it. At first, Nick doesn’t have much of a choice to make as he first needs to realize what is wrong. Unlike Harper, he does come up with a third solution, but we don’t get to see him come to this conclusion. Instead, his choice is made in between scenes. He simply declares what this choice is at a later time.

Overall, I did not feel the level of empathy towards these characters compared to those in LOST. I did feel some empathy for Harper because she is a fellow writer who humorously avoids her writing. Any writer can relate to that. By avoiding what she is supposed to be doing Harper shares a similarity with Jack from LOST. Jack stubbornly avoids the inevitable for six seasons.This long journey of avoidance emotionally wrecks him. When he finally accepts his destiny, it is one of the most satisfying moments in television and film history. Even though I enjoyed Harper’s sense of humour, I prefer the more emotional approach to character. Such an approach allows you to better appreciate the enormity of the journey a character goes through. Jack might have a sense of humour but he certainly tips closer to the emotional end of the spectrum.Arguably, I may be faulting Riddle’s story for being something that it’s not, and who wants a story that’s an exact clone of another story anyways? The difference is especially apparent in the fact LOST had the luxury of developing its characters over the course of 121 episodes whereas Riddle only has 322 pages.

What Riddle doesn’t clone is his personal philosophy on life and storytelling. He expresses this philosophy by tailoring his characters to the science fiction and dystopian genres, all the while using Harper’s career as a writer to discuss storytelling. Nick and Harper are tailored to the dystopian genre because their problems express anxiety about the future. When they make poor personal choices they “depart” from who they should be and arrive at desolate versions of themselves. Additionally, this anxiety extends to how these personal choices will negatively impact the world at large. The big science fiction concepts are used to explore the impact of those choices. While reading the exposition for these concepts I felt empty and bored. The science results in giant vanity projects for many of the characters. The world that is built from these ideas is not interesting in itself, but the characters get swept up in the scale of the ideas, and seem to think they are more imaginative than they actually are. The fact these vanity projects are named after Greek mythology makes a god complex abundantly obvious. However, as previously mentioned these sci-fi concepts are used to demonstrate how the characters’ poor choices impact the world, which means these sci-fi concepts are ultimately well used. To describe them as uninteresting is to note that vanity projects in science fiction are commonplace, which makes it difficult for them to illicit the surprise and awe they once had. Riddle is wise to recognize that these projects will not solve the characters’ problems, making the emptiness and boredom they illicit strangely appropriate.

Instead, story itself is the solution to the characters’ problems. A common science fiction trope is used as a metaphor for story itself.  Departure makes the argument that story creates self-knowledge for the characters and for the rest of humanity. This self-knowledge grants Nick and Harper new found lucidity to apply to their respective dilemmas. By applying their lucidity they have a chance to vanquish their dystopian anxiety about the future. According to the author’s biography, his own journey inspired that of his characters. The rear flap states that “he spent 10 years starting internet companies before retiring to pursue his true passion: writing fiction.”  This piece of information brings the meta-storytelling of Departure into focus. By understanding himself and pursuing his passions, the author put his own self-knowledge into action. The question is: will Nick and Harper do the same? For Riddle, taking control of one’s own story is self-knowledge well-utilized. If I smiled while reading this book, it was in response to Riddle’s passion for story. Of course, he is preaching to the choir. It is certain that the marketing team was pleased when they saw that the characters share similarities with the author. As demonstrated by the author’s biography, the marketing team didn’t pass up the opportunity to point out those shared characteristics. Allowing the audience “to get to know the talent behind the product” is one of the oldest tricks in the game.

It should be noted that Riddle’s philosophy is not as spiritual as the philosophy of LOST, which marks an important distinction between the two. More specifically, LOST is influenced by the mysticism of Star Wars while Departure feels more like a self-help seminar at times. Mysticism and self-help are both concerned with becoming a part of something bigger than yourself, but mysticism is the more emotionally convincing of the two. After all, story is about feeling everything the character feels. Without that level of empathy it is difficult to believe the story has taken you all the way. The exclusion of mysticism does create a benefit to the story. The benefit is that it allows the tale to maintain the purity of the science fiction genre. Science fiction gives the audience a concrete explanation they can believe in, while mysticism—by its very nature—defies explanation. Many complained that LOST pretended to be science fiction before morphing into science fantasy, despite the fact mysticism was present since the pilot episode. It is safe to say Riddle won’t be facing that particular criticism when it comes to Departure. The absence of mysticism is also apparent in Riddle’s descriptions of the environment. He focuses on man-made structures rather than the natural environment itself (See pp. 68 for a key example). By focusing on these structures he is again granting primacy to science fiction. LOST does have important man-made structures scattered across the Island, but the story and camera do not overlook the environment. In the end, Riddle’s approach may not provide the emotional authenticity of mysticism, but he does achieve the science fiction genre more purely than LOST.

Whenever Story A is compared to Story B it suggests you will like Story A because of the shared similarities to Story B. The comparison creates expectations in the mind of the reader. The reader’s expectations may illicit the curiosity required to pick up the book, but expectations can also prevent the reader from appreciating what the story does well on its own. I repeatedly found my own expectations reminding me that I prefer the mysticism of LOST to the science fiction of Departure. With my preference in mind I was also conscious that I would not appreciate it if Departure had been an absolute clone of LOST. Whether a story veers too far from the comparison or goes its own way can results in a no win situation.  Even though the comparison can create a barrier to enjoyment, a story can surprise with its own unexpected characteristics. I picked up the book with the intention of seeing how well the comparison would hold up, but closed the book appreciating Riddle’s passion for storytelling instead. What makes us enjoy a story isn’t necessarily similar premises, tropes, themes, etc. Admittedly I was entertained enough to finish the book, but if given the opportunity I would not purchase my own copy.