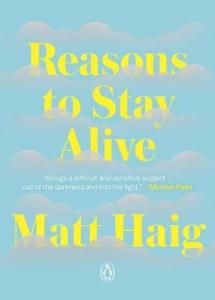 “Read anything you want. Just read. Books are possibilities. They are escape routes. They give you options when you have none. Each one can be a home for an uprooted mind.”

Matt Haig and his girlfriend Andrea were spending the summer in Ibiza, working at one of the island’s biggest party destinations when the otherwise reasonably healthy twenty-four year old suffered a mental breakdown, consisting of depression, panic attacks, and suicidal thoughts. He had perhaps been drinking too much, and sleeping too little, but the severity of the breakdown seemed out of all proportion to anything that had gone before. After a few very intense days, he found himself standing on the edge of a cliff, contemplating ending his life. In retrospect, there were a few warning signs, but nothing that would have stuck out without the breakdown. From the distance of fourteen years, Haig recounts the experience, and the slow road back to mental and physical health. Presented in a variety of essays, lists, and anecdotes, it offers small, accessible pieces to help digest a difficult topic.

In general this book is much more about the experience of depression in its various stages than about recovery from it. Doctor’s visits, therapy, and medication are mentioned much more passingly. The sections about getting better seem to focus more on self-care. Haig credits not taking pills with being alert enough to observe what made him feel better, or worse, and then act accordingly. He obviously has a complex and conflicted relationship with medication. Early on he states, with several qualifiers, “I am reluctant to come out and be all anti-pills because I know for some people some pills work.” His own recovery took place over a period of years, largely unaided by medication because the thought of taking anything that might alter his mind (potentially making things worse) triggered a panic attack. His depression only allowed him to imagine the worst case scenario of things getting even darker, because it stole the belief that better was possible. The problem was so pronounced that he describes swallowing an ibuprofen as feeling like he had taken “an overdose of methamphetamine.” But over the course of the book, it does seem that his difficulty goes a little beyond that to a general suspicion of pharmaceuticals, and a desire to experiment with alternative medicines. The first suggested book in the Further Reading section at the end is Bad Pharma by Ben Goldacre.

When Haig suffered his breakdown, he was in a foreign country with only his girlfriend. Fortunately, she had the strength to drag him to a doctor, pack up their life in Ibiza, resist the pressures of an employer who wanted her to send him home alone, and get both of them back to England where they had a support system.  As someone who has supported loved ones struggling with mental health issues, but never battled them myself, I related particularly strongly to Andrea. I read this book hoping to better understand what it is like to experience depression and anxiety, but also found someone who demonstrated the empathy and resourcefulness we all hope to find in ourselves if faced with the same challenge. Haig both dedicates the book to her, and spends a good number of pages showing how she was instrumental to his recovery.

Haig is a writer, so it is perhaps unsurprising that books were another major pillar of his recovery. Early on, he was too anxious and unfocused to be able to read, and so his illness also stole one of his greatest pleasures from him, one more casualty of a disease that tried to take everything. When he began to feel a little better, he reclaimed that aspect of himself with a vengeance, devouring books as if they were sustenance. Books “weren’t a luxury good during that time.”  Well enough to feel isolated, but still too ill to feel at ease among people outside his family, books were his  “way out of being lonely.”

Reasons to Stay Alive is an account of Haig’s individual experience, however, he sometimes speaks about depression more broadly. A frequently highlighted passage of the book reads “If you have ever believed a depressive wants to be happy, you are wrong. They could not care less about the luxury of happiness. They just want to feel an absence of pain.” But he does also acknowledge unique experiences of depression up front, writing “there is no right or wrong way to have depression or to have a panic attack, or feel suicidal.” Given the overwhelming number of depressed or anxious readers who have praised Haig for capturing their own experiences, this seems like a strong pick for both those who have experienced the illness, and their friends and family who want to better understand it.

One thought on “Reasons to Stay Alive”