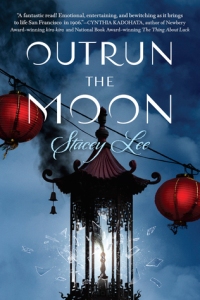 “The closer I am to someone’s grief, the closer I feel to my own. And that is a place with no doors and no windows. No escape at all.”

Mercy Wong is the ambitious daughter of a hard-working Chinese-American launderer and a famous fortune teller, trapped in San Francisco’s Chinatown with little hope of advancement now that she has finished all the available grades at the Oriental Public School. Never one to back down easily, Mercy contrives a plan to get herself a scholarship to St. Clare’s School for Girls, one of the best private institutions in the city. But getting into the school is only half the battle, and when a historic earthquake strikes San Francisco in April 1906, all of Mercy’s plans are thrown aside, as she and her classmates struggle to survive in a city that is torn apart and burning.

In order to get into St. Clare’s, Mercy agrees to help the chocolatier Mr. du Lac get permission from the Chinese Benevolent Association for him to open a store in Chinatown. After striking this bargain, Mercy is forced to pose as a wealthy Chinese heiress, to help mute potential objections to her presence at the school. Having never been to China, Mercy must put on an act, drawing on what she can remember of her father’s stories of his childhood. Normally the novel would centre on the discovery of her deception, but lurking behind the threat of discovery is the reader’s knowledge that the great earthquake is imminent.

Outrun the Moon is full of juicy tidbits about the history of San Francisco, and Chinatown in particular. I ended up down a Google rabbit-hole only twelve pages into the book, after Stacey Lee referenced the forced inoculation of Chinatown residents following the bubonic plague outbreak that struck San Francisco in the early 1900s. Chinatown was particularly targeted, including a quarantine, and the eventual requirement that all residents of the neighbourhood be vaccinated. Many of these details are worked into the opening pages of the novel, and so it took me a while to really settle into the story, because I was constantly being caught up by the fascinating rabbit trails Lee only hints at in the text. Lee also includes quite a bit of information about Chinese rituals and superstitions, including Mercy’s aversion to the number four.

While it is primarily about Mercy’s ambitions, there is a slight romantic subplot to Outrun the Moon, as Mercy hopes to marry Tom, a doctor’s son from Chinatown. But Tom is absent for a large part of the book, pursuing his own dream of flying, rather than his father’s insistence that he follow him as a doctor. Once Mercy is at St. Clare’s, the novel focuses on the relationships she is developing with the other girls at the school, particularly Francesca, an Italian-American girl who faces her own teasing about her heritage. When Mr. du Lac proves to be a flaky business partner in their Chinatown venture, Mercy reluctantly allies with his prickly daughter Elodie in order to hold up her end of the bargain. The two girls are never precisely friends, but the evolution of their relationship over the course of the novel is a pleasure to watch. In the aftermath of the earthquake, the students must come together to try to shelter and feed everyone while the city is under martial law, awaiting relief assistance. This opens the second act, in which the girls really come into their own. Like Lee’s first novel, Under a Painted Sky, Outrun the Moon is most notable for the attention given the relationships between the diverse girls.

One thought on “Outrun the Moon”