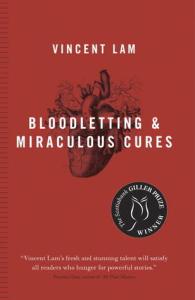 Four young medical school students start out on the road to becoming doctors, sure of their nobility of purpose and their calling, the real and trying rigours of the medical profession still ahead of them. Ming, Fitz, Sri, and Chen come from different backgrounds and have different career paths awaiting them. In a series of twelve interlinked short stories, Dr. Vincent Lam takes the reader behind the scenes of the medical world, from medical school to residency to the emergency room and the operating room. He also draws on his experience in international air evacuation medicine and his knowledge of influenza pandemics to create richly detailed fictional accounts.

Lam touches on a lot key moments in a doctor’s medical career, from getting accepted to medical school, to the first cadaver lab, to the long nights of residency, losing a patient, and even working during a pandemic. “Contact Tracing,” the story about the SARS outbreak, holds up remarkably well over a decade later, perhaps because it could really be the story of any unexpected pandemic.

Bloodletting & Miraculous Cures also touches on important cultural issues. In “Eli” Fitz is called on to treat a patient who he believes to have been the victim of police brutality. He must decide if he is willing to be complicit in helping them cover up the abuse, or if he has the strength of character to stand up to them. In “Winston” Sri is faced with a patient who has had a mental break down. When Winston fails to return to the hospital for follow-up care, Sri has to choose between letting the case go, and stepping outside the usual bounds of the doctor-patient relationship to track down his charge.

For fans of Lam’s 2012 novel, The Headmaster’s Wager, Bloodletting & Miraculous Cures also contains “A Long Migration” in which Chen is called on to care for his ailing grandfather. He travels to Australia, where his family depends on him to call them in from around the world in time to attend the patriarch’s last moments. His grandfather, Percival Chen, is the protagonist of Lam’s novel, where he featured as the gambling, womanizing headmaster of an English school in Saigon. But in “A Long Migration,” he is an old man in his last days, considering his life and possible conversion to Christianity.

Lam’s characters are complicated and flawed, fallible humans who have been trusted with unthinkable responsibility, and faced with terrible dilemmas. This adds depth to the rich detail of the author’s own medical experience, making for an intriguing collection.