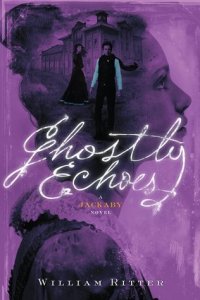 “Questions are to the clever mind as coal is to the stoker. I will worry more when we run out of them.”

A decade ago, Jenny Cavanaugh was murdered at 926 Augur Lane, currently the abode of one R.F. Jackaby, and his assistant, Miss Abigail Rook. Jenny still cannot remember who killed her, and efforts to help her remember only push her into ghostly echoes that degrade her soul. But she has asked Jackaby and Abigail to take up the case, even knowing that getting her answers may untether her from the mortal world, her unfinished business finally complete. However, the Seer and his assistant are soon called in on another case. Two scientists have disappeared, and the murder of Mrs. McCaffery bears an eerie resemblance to Jenny’s own death. Either a copycat has emerged, or her killer is still stalking New Fiddleham.

Three volumes into the series, the overarching plot is starting to take shape. The mysterious pale man who has been following Abigail finally steps out of the shadows, only to reveal that he is a small part of a much bigger plan. He also seems to know much more about Jackaby’s past than even his closest confidants. As they investigate Jenny’s murder, it becomes apparent that her death has some connection to the deeper mystery of New Fiddleham. While the action is less fast paced than in Jackaby or Beastly Bones, this makes room for important character development, as we finally learn how Jackaby came to be the Seer.

Ghostly Echoes also sees the introduction of Lydia Lee, who is rescued from a beating in a back alley by Jackaby and Abigail. A tall, broad shouldered woman with a low voice, she is attacked after two men who solicit her services realize that she is not quite what they expected. Interestingly, while Abigail sees what the two men saw, Jackaby, with the Sight, seems to see Lydia entirely as herself. Unfortunately, Lydia has little role to play in the story, and seems to have been introduced more as an object lesson than as a fully realized character. But of course, since this is a series, it is possible that Ritter is bringing her on-stage now because she has a bigger role to play in the fourth and final volume of the series.

Ghostly Echoes leaves the reader with as many questions as answers. The murder of Jenny Cavanaugh is solved, but in uncovering the answers, Jackaby and Abigail have meddled with dark forces that do not willingly suffer interference with their plans. The sense of resolution is incomplete, because it is evident that there is a much larger battle on the horizon.