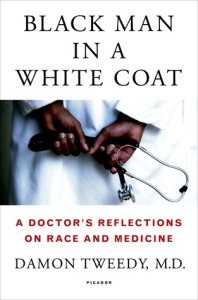 “When I started medical school and learned about the adverse health outcomes that afflicted black people, I had assumed these disparities were chiefly due to genetics. To be sure, there are diseases like sickle-cell anemia, lupus, and sarcoidosis, which appear to preferentially target black patients at a biological level. But what had become abundantly clear to me during my years in medical school and as a doctor, however, were the many ways that social and economic factors influence health, and, more than anything else, account for the sickness and suffering that I have seen.”

The son of a working class African-American family from Maryland, in 1996 Damon Tweedy accepted a scholarship to Duke University Medical School. As he began learning about various diseases and conditions, he was soon bombarded by a familiar refrain: “more common in blacks than in whites.” Tweedy initially assumed these problems were genetic vulnerabilities, but his experiences soon led him to realize that social and economic factors were, in most cases, much more significant, and in turn these factors play out “along racial lines.” Initially intent on avoiding drawing any attention to his race, Tweedy instead becomes interested in reducing these disparities.

Tweedy divides his books into three parts, proceeding chronologically, first from his medical training at Duke, onto his internship, and then into his practice as a psychiatrist. Each stage presents new challenges. As a student, one of his professors mistakes him for a maintenance worker come to change the lights in the lecture hall, then tries to pretend that the error never occurred. In medical school, Tweedy must balance the well-being of his black patients against the problems that might be caused if he confronts his superiors. He is relieved, in one case, when the supervising doctor is the one to challenge a white nurse who asserts that a nineteen-year-old black woman who suffered a placental abruption after smoking crack cocaine should be sterilized. Later, in his own practice, he confronts new challenges, such as treating a biracial woman who is afraid of black men because of how her black father treated her white mother.

As a scholarship student, Tweedy starts out with an inferiority complex, afraid that people will think he does not deserve to be in medical school. He fears anything that will draw attention to his race, and cringes at every mention of racial medical statistics. This initial fear tempers somewhat, but it leads to his very cautious and measured approach in this book. Tweedy largely skirts around more controversial topics such as the war on drugs and discriminatory policing, both factors which contribute to the shortening of black lives.

Through a more personal lens, Tweedy also examines his own health problems. He discovered his high blood pressure when he and a classmate were practicing taking vital signs in their first year of medical school. A follow-up visit to the doctor also revealed early signs of kidney failure, prompting Tweedy to rethink his diet and exercise routines. This helps him relate very personally to the difficulty patients have making lifestyle changes for the sake of their health. But while he realizes that his own blood pressure and blood sugar are more important health metrics than his weight, since he remains naturally thin throughout, he doesn’t seem to extend this insight to patients, often remarking on their weight. He also fails to stand up for a black patient who wants to try lifestyle changes before going on blood pressure medication, afraid that he will be considered a racial agitator if he challenges the other doctors.

This book felt particularly relevant at the time of reading, as news went viral of a Delta flight attendant refusing to believe that Tamika Cross, a Texas obstetrician and gynecologist, was a doctor. Tweedy’s experience makes it abundantly clear that there are disparities for black doctors and patients alike, and that they play out in subtle ways throughout the medical system, but add up to a large gap in care. What is less clear is the path forward. The Affordable Care Act is acknowledged as something that may help some patients, but not enough. Nor does Tweedy feel that every black patient needs a black doctor; he more than once trips over his own assumptions about black patients, and encounters skepticism of his credentials among both black and white patients. But his stories provide a window for issues that deserve broader consideration.

5 thoughts on “Black Man in a White Coat”