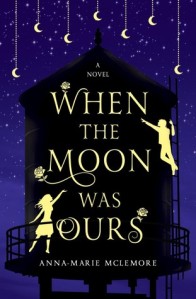 “She had seen him naked. Almost naked. And she understood that with his clothes off, he was the same as he was with them on. ”

When the people of the town tore down the old water tower, out came Miel, soaking wet but otherwise unharmed, aside from her deathly fear of pumpkins. This unusual appearance is the least of her oddities; roses grow unbidden from her wrist, and the hem of her skirt is constantly wet, even in the heat of summer. Always half-regarded as a witch, her only friend is Sam, a boy with secrets of his own. He paints and hangs beautiful moons from the trees, and he is maybe the only boy in town who has never fallen in love with one of the Bonner sisters, four more suspected witches because of their great beauty and even greater heartlessness. But when the Bonner sisters seem to be losing their power, they decide that Miel’s roses hold the key to restoring it. And if she doesn’t give them up, neither her secrets, nor Sam’s, will be safe.

As the story opens, Sam and Miel’s long friendship—dating from the time that Sam was the first person to approach her after she emerged from the water tower—has just begun to transform into something more. Young adult narratives commonly build up the romance slowly, making readers wait for so much as a kiss, but Anna-Marie McLemore boldly depicts Sam and Miel in bed together in chapter two. In interviews, McLemore has said that she had to rewrite the book “four times just from the ground up”, chasing her own fear of honestly portraying “safe consensual queer sex” in a young adult book. But the result is a very tender scene that becomes a necessary foundation for the further development of Sam and Miel’s relationship in the rest of the book.

Sam is a trans boy who has latched onto the concept of bacha posch, a practice in some parts of Pakistan and Afghanistan, where families who have no sons dress their daughters as boys so that they can fulfill the role temporarily. As adults, they are expected to return to living as women, and marry. Sam, or Samir, learned about the practiced from his Pakistani grandmother, and seizes on it as a means to live the life he wants, while also hoping that when adulthood arrives, he will somehow be able to become the woman that society expects. Sam’s mother, and Miel’s guardian, Aracely, have hidden Sam’s secret from everyone else for years, but now the Bonner sisters are threatening to expose him in a town not known for its tolerance.

The villains of McLemore’s story are the four Bonner sisters, Chloe, Lian, Ivy, and Peyton. Their power was broken when Chloe left town to hide a secret, and even though she has returned, nothing is the same as it was before. Ivy takes up the mantle of power among the sisters, desperate to restore them to their former glory, claiming any boy they choose, and breaking his heart when they’re done. Their role as antagonists is founded on this villainized sexuality, then built upon by their sense of entitlement, and willingness to exploit other people’s secrets even as they guard their own.

When the Moon Was Ours also draws on the legend of La Llorona, a ghostly woman who haunts the river, crying for her drowned children. The ghost of a similar tragedy hangs over Miel’s past, and her unwillingness to speak about her life before she came out of the water tower, even with Sam, who has trusted her with his deepest secrets.  She is in the habit of consigning the roses that grow from her arm to the river where she hears her mother crying, until the Bonner sisters become determined to seize these “wasted” blooms for their own purposes. This myth adds one more layer to a love story suffused with magic realism, and haunted by tragedy.

Find more of my book-o-lanterns from previous years

3 thoughts on “When the Moon Was Ours”