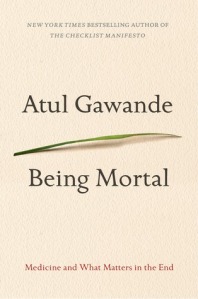 “Death, of course, is not a failure. Death is normal. Death may be the enemy, but it is also the natural order of things.”

In 1945, most Americans died at home. By the 1980s that number was down to 17%. Today it is trending back upwards as more people pursue options that allow them to live out their final days in the comfort of their own homes. Doctor and writer Atul Gawande explores how dying became medicalized in the intervening years, as science offered new innovations for beating back disease in the 20th century. Encompassing both the elderly and the terminally ill, Gawande examines how end of life care falls short of providing patients with the best possible quality of life in their final days, instead focusing on what else can be tried to fix the unfixable, and beat back the inevitable. From nursing homes to cancer wards to assisted living facilities to hospice care, Gawande reveals the shortcomings of the institutions we have created for the dying, and asks how we can be better prepared to face the question of mortality with clear eyes and compassion.

Atul Gawande’s previous books Better and The Checklist Manifesto both make it amply clear that he takes continuous professional improvement extremely seriously. In Being Mortal, he examines how society and the medical system can improve the treatment and care of elderly and terminally ill patients. Using the case of his wife’s grandmother, he shows how North American nursing homes commonly fall short, by focusing on safety rather than quality of life. Turning to his own grandfather in India, he shows some of the comparative advantages of multi-generational in-home care, but also highlights the inter-generational conflicts and tensions that can arise from this living situation. In the end, he concludes that both models fall short of providing the elderly with the level of control they need to have over their lives in order to be happy.

Gawande is wary of over-idealizing care provided by children in their homes for their elderly parents. In addition to his own grandfather, he uses the case of Shelley and her father Lou to show the stresses and tensions that this can result in. However, many people feel that this model is the ideal, and it is commonly argued that the decline of children caring for their parents indicates a lack of respect for elders in North American culture that comes from the veneration of youth. But Gawande has a slightly different take. He argues that what is being venerated is not youth, but the independent self, and both nursing homes and living with one’s children degrade that independence which is so central to the North American identity. But this way of thinking offers up a question that has been insufficiently answered: “if independence is what we live for, what do we do when it can no longer be sustained?”

Gawande talks about patients, both his own and those he meets in the course of his research, talking with geratiatricians and hospice care workers. He also draws on examples from his own life. Early in the book, he discusses the situation of his wife’s grandmother, Alice Hobson, who lived independently for many years, but eventually began having falls that made it too dangerous for her to continue living alone. She ultimately ending up in a nursing home she despised. Later, after he has explored the nuances of geriatric and hospice care, Gawande approaches the case of his own father, who was discovered to have a slow-growing tumour in his spine when he was in his seventies. His father’s case shows Gawande putting his new skills to use, but equally demonstrates that life is complicated and unpredictable, and that even with this knowledge, the end of life will not necessarily be ideal. Gawande is offering hope and help, not a magical solution that will make every difficult situation easy.

Being Mortal is a book that is important for young and old alike. For those facing choices about where and how they will live in their last years, Gawande offers food for thought about the different options available. Younger readers will be better prepared to navigate these conversations with their parents. And of course, anyone of any age can find themselves faced with an unexpected illness that catapults them into facing their own mortality sooner than they might have wished or planned. Readers will emerge with a better understanding of the warning signs of decline that can severely limit independence, the factors that most affect satisfaction with elder and hospice care for the patients, and questions to use in discussions with doctors and loved ones.

3 thoughts on “Being Mortal”