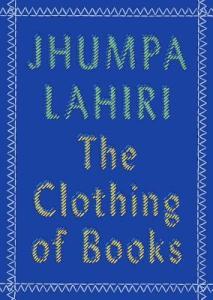 When you pick up a book, the first thing you see is the jacket. In most cases, the author of the book has had little or no input into the design. The words do not belong to the writer, but to the publishing house’s copy writers, charged with marketing the book, and to the other writers or critics who have praised the book in blurbs. With the exception of their name, and possibly the title, the author is nowhere to be found. In The Clothing of Books, Jhumpa Lahiri interrogates this tension between form and content, both from her early perspective as a reader, and her later experience as a writer.

The Clothing of Books was originally delivered as the keynote address at the Festival degli Scrittori in 2015. The speech was written and delivered in Italian. As chronicled in her book In Other Words, after completing her 2012 novel The Lowland, Jhumpa Lahiri moved with her family to Rome, and largely gave up reading and writing in English to focus on her passion for the Italian language. In that book, she also expressed her dislike for translating her own work into English. The Clothing of Books was translated into English by Lahiri’s husband, Alberto Vourvoulias-Bush.

Clocking in at only seventy pages, The Clothing of Books is really an essay published as a small gift book, with a price tag of $7.95 USD. However, it is a very cute little book, cleverly designed by Joan Wong, who also designed Chimamanda Ngozi Adichie’s little book We Should All Be Feminists, as well as the paperback cover for Americanah. The cover flaps fold out to form the two sides of a double breasted jacket, with buttons illustrated on the front flap, and button holes on the back. Combined with graphic effects that mimic stitching and textured fabric, the book looks as if it has been literally clothed for its debut.

Inside, Lahiri contemplates how jackets affected her own reading life. With a librarian for a father, Lahiri borrowed many of her books, which were mostly stripped of their dust jackets before being circulated. With these “naked books,” the author’s words were the first thing she encountered. She also expresses this preference for her own books: “I want the first words read by the reader of my book to be written by me.” Yet she also acknowledges that a naked book is “incomplete, in some ways inaccessible. It lacks a door through which to enter the text. It lacks a face.” At used book sales, jacketless books often languish, unsold.

On the flip side, Lahiri examines covers, both those that fit, and those that do not. She contrasts individual designs with those for part of a European publishing series—American readers, think like the Modern Library, but with contemporary authors rather than classics—regarding the latter as a sort of uniform. Contemplating the relationship between Virginia Woolf, and her sister Vanessa Bell, who painted her covers, Lahiri notes that a designer does not even necessarily have to read the book to capture it, as Bell did not, taking only a summary from her sister. She also reflects on the stereotypes of India that have been evident in designs for various editions of her own books, even those set entirely in America. Taken together, the two angles form a fascinating, if brief, meditation on the role of the jacket in the life of a book.

2 thoughts on “The Clothing of Books”