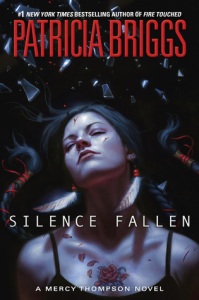 “I’m a mechanic; I fix things that are broken. I turn into a thirty-five pound coyote. I have powerful friends. But when it comes right down to it, my real superpower is chaos.”

In Night Broken, Adam and Mercy declared the Tri-Cities pack territory, and a neutral zone under their protection. Since then, they have successfully defended that claim against the Fae in Fire Touched, proving that they can keep their word. But it seems the challenges are not over, because Mercy is kidnapped not far from home, and the purpose of taking her seems to be to prove the weakness of the Tri-Cities alliance. In coyote form, Mercy manages to escape her attackers, ending up alone and on the run in Europe. With their mating bond silenced by the great distance between them, Adam gathers a group of their allies, and heads to Europe in pursuit of Mercy.

For the first time, Patricia Briggs takes her characters far afield from their Tri-Cities home, with Mercy eventually finding herself in Prague, the territory of an old wolf who has a long-standing feud with the Marrok. Mercy also discovers that the Old Country is rife with ghosts, clamouring for the attention of a walker.  Briggs employs dual timelines, switching perspectives between Mercy and Adam. Briggs also used this device briefly in Frost Burned, the seventh book in the series, in which Adam and the pack disappeared, and Mercy was hunting for them. Here, however, the technique is used throughout the book, and the two timelines are not synchronized. As a result, Briggs introduces each chapter with a blurb in Mercy’s voice that clarifies when events are taking place, and how they relate to the other chapters. It is somewhat awkward, but serves well enough to keep the reader oriented, especially as Adam and Mercy converge later in the book.

Ten books into her series, Briggs has built up a large cast of secondary characters, to the point where many favourites might only be mentioned in passing in any particular volume. In this case, most of the pack and Mercy’s other friends are left behind in Washington. While Mercy is on her own in Prague meeting even more new characters, Adam must choose who to take with him to Milan to confront Mercy’s kidnapper. With the Tri-Cities now declared to be the independent territory of the Columbia Basin Pack, Adam must make his selections carefully in order to represent the new supernatural alliance to the European powers that have decided to challenge the declaration.

One of Adam’s companions for the trip is Honey, a werewolf who has been rising through the ranks since the death of her mate, and since Mercy’s arrival shook up the pack’s traditional gender dynamics, which placed female wolves at the bottom of the ladder. Marsilia, mistress of the vampire seethe, and Elizaveta, the pack’s witch on retainer, also join the delegation. Marsilia is a surprisingly gentle presence this time around, though the book deals heavily with her backstory. However, Briggs seems to be hinting at interesting developments in store for Elizaveta. Stefan, who has been largely absent for quite some time, also joins the group, which is rounded out by a goblin representative for the Fae. The private plane they charter is piloted by another goblin, with a submissive werewolf called Matt Smith as co-pilot. Briggs fits in a running joke about Smith’s name, which he shares with the actor who played the eleventh doctor on Doctor Who. This seems to be a sly nod to the title of the book, since “Silence Will Fall” was the prophecy that anchored much of Smith’s run on the show.

Silence Fallen does not move the overarching story forward so much as it explores reinforces the changes that have taken place in the last couple volumes. Sometimes the next step in a series is fairly obvious, but in this case the way forward is not clear. However, Briggs has promised both the next Alpha and Omega book—Burn Bright, 2018—and the long-awaited Moira and Tom novel before the next installment of Mercy’s saga is due out.