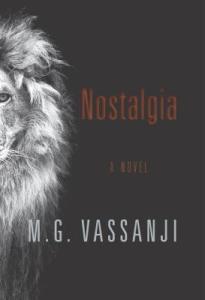 “But now I have this strange feeling that I myself don’t belong. The world is not mine anymore. I who implanted idyllic fictions am a fiction myself and that fiction is falling apart.”

In a future where the wealthy can afford to extend their youth, patients sometimes live multiple lives, having their memories erased and replaced in order to take on new identities. Dr. Frank Sina specializes in treating patients who are suffering from Leaked Memory Syndrome, more commonly known as Nostalgia. These patients are experiencing breakthrough memories from their past lives, a precursor to a potentially serious breakdown. When Presley Smith arrives in Dr. Sina’s office, he has been repeatedly hearing the phrase “it’s midnight, the lion is out” running through his mind. Dr. Sina becomes fascinated and then obsessed with this case, even after Presley declines treatment and then disappears. Dr. Sina continues to investigate, but soon the government comes knocking at his door. By law, most patients have all records of their past lives deleted, but it seems that Presley was an exception, either a criminal, a terrorist, or an immigrant from the other side of the Long Border who has been assimilated. But despite this warning, there is something about the case that Dr. Sina cannot let go, even when it threatens to unravel his own carefully constructed life.

Despite being at the heart of the mystery, Presley Smith is relatively uninteresting as a character. Dr. Sina is caught by the case, but for the reader, there is nothing about Presley to particularly pique curiosity. He seems unremarkable, and more like a plot device pushing the story forward than an individual character until relatively late in the book when his past life is eventually revealed. Before that, he is mostly the spur that causes Frank to begin questioning his place in this society he has helped to build. The more he investigates Presley’s case, the more Frank questions his job, his relationship, and his beliefs. Presley’s unraveling is the trigger, but it is Frank’s coming undone that is centered. Stylistically, Nostalgia is part literary, part sci-fi, part noirish mystery. Vassanji maintains his ponderous literary writing style, with a sci-fi premise, and a slowly unraveling mystery at the heart of the narrative

Like Presley, Dr. Sina’s girlfriend, Joanie, doesn’t feel like a real, fully fledged person. She is a G0, or a Baby, a real young person who has never been reborn into a new life. She lives with Frank, but he is fully aware that she is stepping out with another, probably younger, man on the side. She is a foil to Frank’s rejuvenated state, and an embodiment of the intergenerational divide. This is something that is already present in a way in our own world, but it is magnified in Vassanji’s imagination by the fact that the longer lives of the wealthy “rejuvies” mean that 30% of young people are unemployed, and resentful of the fact that older people refuse to step aside to provide opportunities for the next generation.

Nostalgia depicts a world that is divided between rich and poor, North and South. The Long Border is a literal construction in this world, a barrier that divides the developed North Atlantic region from poor, war-torn areas, except for the occasional carefully orchestrated tourism trip. The South is ravaged by hunger, disease, and radiation, and its residents frequently attempt the dangerous crossing. This fictional physical barrier embodies a figurative divide that already exists in our world and is worsening as the refugee crisis continues to grow. In that respect, Nostalgia feels very real and timely. Although Vassanji spent more than ten years writing the book, it looms large today as the new American administration proposes to build a wall along the Mexican border.

Nostalgia was defended in this year’s Canada Reads competition by Canadian military veteran and current Ottawa city council member Jody Mitic. All of the remaining books received at least one vote for elimination during the second day. The deciding factor against Nostalgia was not clear, but Candy Palmater noted that the book was very male dominated, and Chantal Kreviazuk observed that the narrative was too personal to Dr. Frank. When it was time to cast the ballots, Humble the Poet voted against Company Town, Measha Breuggergosman voted to eliminate The Right to be Cold, and Jody Mitic cast his vote against Fifteen Dogs. Chantal Kreviazuk voted against Nostalgia, and so the final vote went to Candy Palmater—the first free agent after her book, The Break, was eliminated yesterday. Her vote made Nostalgia the second book to be eliminated from Canada Reads 2017.

Need to catch up on Canada Reads Along? Check out my review and recap of The Break by Katherena Vermette.

2 thoughts on “Canada Reads Along 2017: Nostalgia”