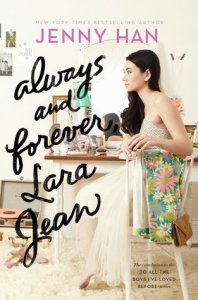 “We’re all just counting down, passing time. Everyone knows where they’re going, and the right now already feels like it’s in the rearview. Suddenly life feels fast and slow at the same time. It’s like being in two places at once.”

It’s senior year, and Lara Jean Song Covey is anxiously awaiting her college acceptance letters, and looking forward to participating in traditions like the senior class trip, prom, and Beach Week. Her boyfriend Peter has already accepted a scholarship to play lacrosse for the University of Virginia, but Lara Jean is worried her grades aren’t good enough to into UVA. She’s keeping busy helping plan her father’s wedding to their next door neighbour, Ms. Rothschild, but sooner or later, the letters will come, and Lara Jean will have to make some big choices about her future.

As in previous installments, the Covey family dynamic is one of the standout aspects of Always and Forever, Lara Jean. Kitty and Lara Jean have both adjusted to the presence of their father’s new girlfriend in their lives. But Margot has missed that adjustment, and so when she comes home to visit, Trina’s presence in their house suddenly feels tense in a way it never did before. For Kitty and Lara Jean, everything has changed slowly, but from Margot’s outside perspective, her family is changing at the speed of light. Each in their own way, the Song girls have to face what this means for their mother’s memory, and their family going forward.

Back at the beginning of the series, the action began with Margot breaking up with her long-term boyfriend, Josh, before heading off to college in Scotland. Before she died, their mother advised Margot, “don’t be the girl who goes to college with a boyfriend.” Now Lara Jean finds herself in Margot’s shoes, facing down her last year of high school, and her dead mother’s advice. Will she follow in Margot’s footsteps, or carve her own path?  Big decisions about her future lie ahead, and Jenny Han has placed this dilemma at the heart of the plot.

Unlike the previous two installments in the series, Always and Forever, Lara Jean has no embarrassing plot catalyst, which was a relief to me as someone who suffers from vicarious embarrassment. In To All the Boys I’ve Loved Before, Lara Jean was forced to face up to her past crushes—including her sister’s ex-boyfriend—when a box of her old love letters got mailed out. In P.S. I Still Love You, her tentative new relationship with Peter was tested when a video of them making out in a hot tub on a school trip was posted to an anonymous Instagram account. Always and Forever, Lara Jean doesn’t rely on any such device, and the book does not suffer for it. Jenny Han really captures the essence of senior year, and strikes the perfect balance in her conclusion to this series.