Hey there, stranger! Yes, I know, it’s been a while. After a busy summer of travel, at the beginning of September my husband and I started the process of buying our first home.  We took possession at the end of October, and moved in November 1. It was a big change that has pretty much consumed my life for the last several months! I didn’t read as much as usual, and my writing time was eaten up by packing, packing, and more packing. Then the packing become unpacking, and things are slowly starting to get back to normal. Here are a few mini-reviews of some of what I read while I was away.

Exit, Pursued by a Bear 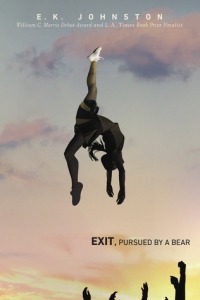 This YA novel is a loose modern retelling of Shakespeare’s The Winter’s Tale. Hermione Winters and her best friend Polly are newly elected co-captains of the Palermo Heights cheer leading team, heading into their senior year, and their final summer cheer camp at Camp Manitouwabing. But all of their plans for the summer are thrown off course when Herimione is drugged, raped, and left in the lake. The book is an interesting and deliberate divergence from the commonly experienced reality of many rape victims, in that Hermione enjoys a supportive family, and is helped by police and counselors. However, she faces controversy in the community, and the wrath of her ex-boyfriend, Leo, who blames her for what happened. Although the identity of Hermione’s assailant is unknown, this is not really a who-dunnit. Rather, it is an emotional chronicle of the consequences of rape, further magnified by the fact that anytime Hermione encounters a boy who was at camp, she must face the idea that he could be her rapist. The biggest standout of this book is the strong female friendship depicted between Hermione and Polly, who echoes Shakespeare’s Paulina.

Love and Other Consolation Prizes

This is Ford’s third historical novel, this time set in Seattle during the 1909 Alaska Yukon Pacific Exposition. Ford opens on the better remembered 1962 fair, and uses it to echo and reflect the main action of 1909. The plot was inspired by a fascinating newspaper clipping from the AYP Expo, advertising the fact that an orphan boy was one of the raffle prizes at the fair. The fate of the real boy is unknown, but in his novel, Ford imagines what might have become of a young half-Chinese boy named Ernest, whose winning ticket is sold to the madam of an infamous brothel. Raised in a Catholic orphanage, Ernest comes to the red light district as the temperance movement is surging in the city, and finds himself caught between the Japanese house girl, Fahn, and Madam Flora’s stubborn daughter, Maisie. As usual with Jamie Ford, I was most fascinated by the carefully incorporated local history. This seems to be his passion, and I often wonder what would happen if he tried his hand at non-fiction. (Disclaimer: I received access to an Advance Reader’s Copy of this book through the library where I work.)

Fluornoy’s debut novel is a complex family tale that follows how the thirteen Turner siblings must grapple with what to do with the house on Yarrow Street where they grew up after their mother is too old to live alone any longer. Fluornoy focuses on the oldest sibling, Charles, aka Cha-Cha, and the youngest, Lela, separated by more than twenty-three years in age, and eleven siblings. Cha-Cha is in therapy after having claimed to have seen a ghost, and Lela is struggling mightily to hide a gambling addiction. Flashbacks illuminate the history of their parents, Francis and Viola Turner, who came North to Detroit for the promise of a better life than the one the South offered its black citizens. Thematically, the book deals broadly with place, both the importance of the Turner family home, and the history that resides there, and also the city of Detroit. Fluornoy also addresses the legacy of addiction within and between generations of a family, and how families understand mental health and addiction more generally. The plot is slow moving, but the highlight is the complex family dynamic amongst the many siblings.